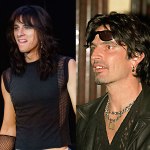 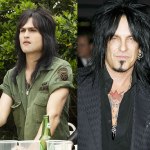 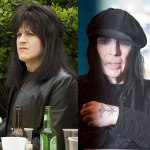 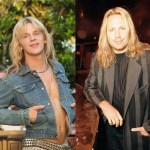 ‘The Dirt’ is now on Netfix and the movie explores the origin story of one of the biggest rock bands of all-time — Mötley Crüe. The stars of the movie, including Machine Gun Kelly, look almost identical to their real-life rocker counterparts.

The Dirt, a Netflix film based on the best-selling autobiography from Mötley Crüe, showcases the band’s success and excess as four misfits rise from the streets of Hollywood to the heights of international fame. The cast includes Machine Gun Kelly, 28, whose real name is Colson Baker, stars as Tommy Lee, Douglas Booth, 26, stars as Nikki Sixx, Iwan Rheon, 33, plays Mick Mars, and Daniel Webber, 30, plays Vince Neil. The casting for the movie is on point. The four actors look extremely similar to the Mötley Crüe guys, and their transformations into the iconic rockers are unreal. The music was wild, but their hair in the ’80s was even wilder.

The Netflix film is Machine Gun Kelly’s first major leading role in a movie. While he’s known for his music, Machine Gun Kelly has made quite an impression with his acting skills, including his performance as Tommy Lee, 56. He’s had roles in movies like Bird Box and Captive State, as well as the Showtime series Roadies. Douglas, known for his roles in Romeo & Juliet, Mary Shelley, and Noah, looks strikingly like Nikki Sixx, 60, in the band’s early days. Iwan is taking a turn from his sinister role as Ramsay Bolton on Game of Thrones to play lead guitarist Mick Mars, 63. Australian actor Daniel, who recently starred in The Punisher, rocks a long blonde wig to play Vince Neil, 58.

The film recently celebrated with a massive premiere in Los Angeles on March 18. The entire cast attended, as well as all of Mötley Crüe. The band’s autobiography, The Dirt: Confessions of the World’s Most Notorious Rock Band, was released in 2001.