No one does a New York Rangers game like Joe Jonas and Sophie Turner! The engaged couple had date night at Madison Square Garden on March 19, where the Rangers suffered a 3-2 loss to the Detroit Red Wings, and Sophie, 23, stole the show when she was honored as a guest on the jumbotron. As the team paid tribute to her Game of Thrones character, Sansa Stark, the camera then panned to the actress, who was holding a glass of red wine, while sitting with her fiance. And, she was the least bit camera shy.

Sophie puckered her lips and began dancing as the crowd cheered her on during the “Celebrity Welcomes” video. She then dabbed for the camera in her silver puffer jacket, before she took down the entire glass of red wine with her other arm raised in the air. Like a champ, Sophie then wiped her mouth with her sleeve as she laughed along with her seat mates at the hockey game.

As Sophie put on a show for fans inside the Garden, Joe, 29, looked up at the jumbotron with a smile on his face. The singer sported an all black outfit with a matching baseball cap, while his bride-to-be rocked a half-up ponytail with dark grey jeans. Take a look at the couple, below. And, don’t miss out on the epic replay of Sophie’s wine chug, which was captured by a fan on Twitter.

Joe and Sophie, who first began dating in November 2016 after meeting through mutual friends, got engaged in October 2017. After his brother, Nick Jonas hit the alter before him in late 2018, when he married actress Priyanka Chopra, speculation about when Joe would tie the knot started to picked up speed. While Joe and Sophie have yet to divulge the details about their upcoming nuptials, the singer did spill some of the wedding tea during a recent appearance on The Late Late Show with James Corden.

“We’re getting married this year,” Joe confirmed to Corden on March 4. “We’re going to have a summer wedding, which I’m looking forward to. It’s going to be a lot of fun.” Well, that gives us a better idea of when these two will say “I do”! 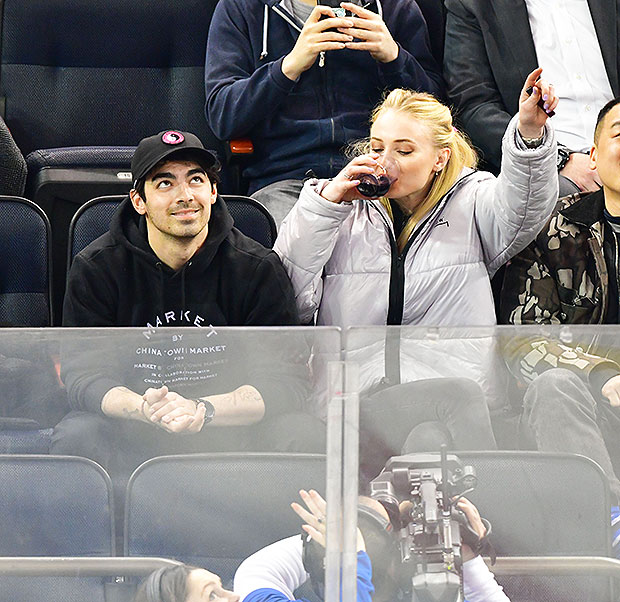 “Her whole family doesn’t like football, they like rugby. So now I have to figure that out. We’re going to have a flag rugby game at the wedding, and a flag football game, so if all the groomsmen show up with black eyes and broken arms, I’ll be very proud,” Joe joked.

Corden then asked Joe if he had learned anything from Nick and older brother Kevin‘s nuptials, as his quickly approaches. “Mostly things not to do,” he joked. “All 18 of Nick’s were amazing,” Joe teased once more.