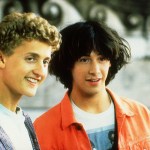 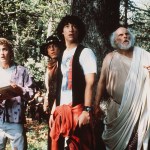 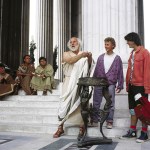 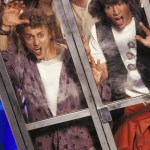 This is not a drill. Yes, the ‘Bill & Ted’ sequel is officially coming and dedicated fans are happily freaking out about it on social media.

Bill & Ted fans, all your birthdays and Christmases have come at once. Keanu Reeves, 54, and Alex Winter, 53, officially announced on March 20 that a sequel is coming and will be in theaters in 2020. Nearly three decades after 1991’s Bill & Ted’s Bogus Journey – and 30 years after the original Bill & Ted’s Excellent Adventure was released in 1989 – the air guitar-loving duo will return to the big screens.

In a 37-second video shot at the Hollywood Bowl in Los Angeles, Keanu and Alex shared the news with fans, which was then tweeted. “Hi. I’m Alex Winter,” the blond actor who plays Ted said. “And I’m Keanu Reeves. And together we are Wyld Stallions,” Keanu added, referring to their fictitious band. Alex added, “And we’re here, at the Hollywood Bowl where we’ll never play, but we’re here to announce something.” The pair then revealed that they’ll be filming Bill & Ted 3: Face The Music this summer. “And it is all because of you guys, so we owe you guys and so we owe you a huge debt of gratitude and we wanted to say thank you,” Alex said, “And be excellent.”

Bill & Ted fans took to Twitter to freak out about the return of their beloved time-traveling rocker heroes, complete with GIFs of them playing air guitar and delivering their famous catchphrases like, “Party on, dudes.” “YES GOD PLEASE OH MY GOD,” one fan wrote. “A most EXCELLENT surprise on my birthday! Party on, dudes!” another Bill & Ted devotee tweeted. Yet another fan gushed, “This is awesome and something I’ve been waiting for since I was a teenager and first fell in love with these movies. Thank you guys.”

This is awesome and something i've been waiting for since i was a teenager and first fell in love with these movies. Thank you guys 😘🤗❤️🎸

Bill and Ted may be returning but things have changed a lot. They’re now middle-aged dads. Teens no more, they have wrinkles and grey hair but, if this video is any indication, they definitely are still most excellent.