Paris Jackson isn’t laying low since she shot down a report, which claimed she attempted suicide earlier this week. The singer stepped out with new boyfriend, Gabriel Glenn at ‘The Dirt’ premiere in LA on March 18, where she looked happy and healthy!

Paris Jackson appeared to be in good spirits at the LA premiere of The Dirt on March 18, despite a recent report that claimed she attempted suicide days prior. The 20-year-old singer was all smiles with new boyfriend Gabriel Glenn, as they posed on the red carpet together. The couple coordinated in all black ensembles. — Paris rocked a cool motorcycle jacket with silver studs, while Glenn wore a similar leather jacket and sunglasses.

Some were surprised to see Paris at the premiere, since just 48 hours prior, a report claimed she attempted suicide following the negative backlash from HBO’s Leaving Neverland. The documentary contains sexual molestation allegations against her late father, Michael Jackson, made by Wade Robson, 36, and James Safechuck, 40. Police and EMS responded to Paris’ LA on the morning of March 16, after family sources told TMZ that Paris had slit her wrists. The site also reported that Paris was then placed on a 5150 hold.

However, Paris denied the report on the same day it was released. “F–k you you f–king liars,” she tweeted in direct response to the story. Soon after the report was released, a source denied the suicide attempt claim to HollywoodLife. “Paris had an incident this morning that required medical treatment. She is currently resting at home and doing fine. Any reports of a 5150 hold/suicide attempt are simply untrue,” an insider close to the young star told us. 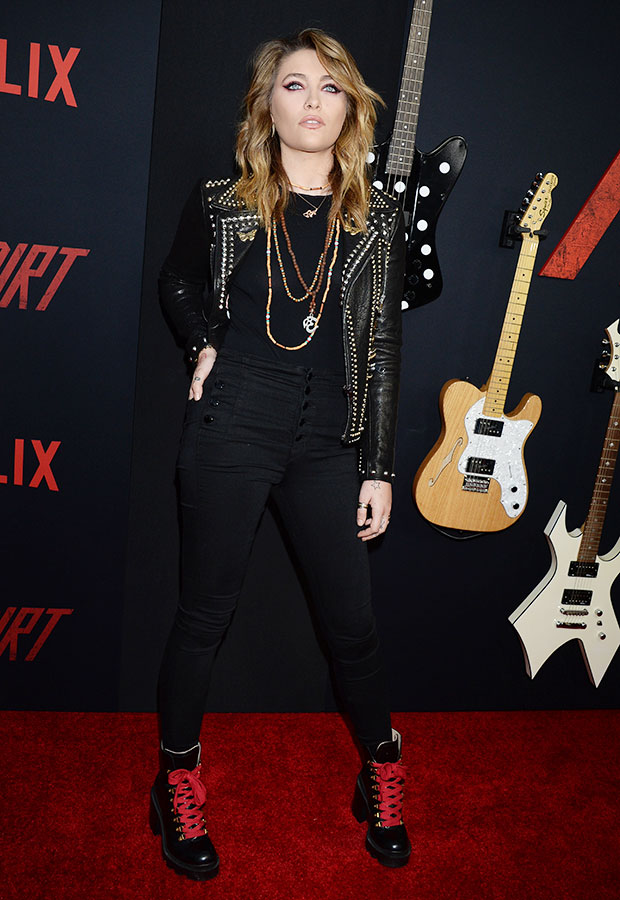 Paris has been going through a lot this year. From tabloids claiming she’s pregnant, to the aftermath of Leaving Neverland, and a new report, which alleged she fell asleep at the wheel while driving with her boyfriend — Paris has been vocal about the “bullsh-t” she’s had to deal with. On the same day as The Dirt premiere, Paris slammed a report that claimed she fell asleep at the wheel after she was photographed with her eyes closed at a gas station with Glenn in Los Angeles.

“*Parks at gas station waiting for my boyfriend to pump gas* *closes eyes to listen to favorite song* paps take pic and zoom in so you can’t see that i’m parked and accuse me of falling asleep at the wheel,” Paris tweeted. “When will this stop?” she continued, adding, “this past week it’s been nonstop bulls—“.