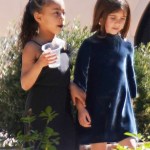 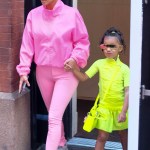 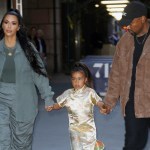 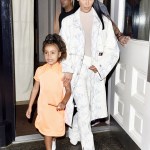 She may only be five-years-old, but North West has some killer dance moves! After she attended Kanye West’s Sunday church service, her mom, Kim Kardashian, shared the most adorable video from the day.

Now this is a major mood. Five-year-old North West busted out some show-stopping dance moves on March 17. The daughter to Kim Kardashian, 38, and Kanye West, 41, was caught moving and grooving at her dad’s weekly church service, and the moment was too cute for words. In the video, shared to Kim’s social accounts, the eldest of the reality star’s three kids was seen jamming out with a friend. Both gals were rocking head-to-toe black, and the entire moment was style goals all around. With shades on, and a feather dress, little North shimmied to the uplifting live music playing behind her. Apparently, North waited all week for the big event to arrive! “Her favorite part of the week is dancing during Sunday Service,” Kim captioned the adorable video.

Of course, North’s flawless dance moves inspired a hilarious set of tweets. The internet simply could not get enough of the cute clip. “North West has more money, better style, and better dance moves than I will ever have,” one fan wrote. “North West is my spirit animal. @KimKardashian can she please teach me her dance moves?” another asked. “At 5 years old, North West is richer and cooler than I’ll ever fucking be,” yet another said. Some even admitted that despite being many years younger, North could still outshine them on the dance floor. “North West can dance better than me, but I’m not mad about it,” the tweet read.

North’s flawless dance moves weren’t the only thing the caught everyone’s attention that day. The event, which has become a weekly tradition for the Kardashian-West family this year, also featured an appearance from legendary rapper DMX. In another video from the Sunday service, he was seen leading a prayer in front of the crowd. Other artists such as Kid Cudi, Charlie Wilson and Francis and the Lights have previously stopped by to perform in the past. The weekly services first began in January of 2019.

While the live music at Ye’s service sounded beautiful, it was definitely North who stole the show this time around! Between her feathery black outfit, and Penelope Disick’s adorable blue dress, these ladies are equally as stylish as their famous mums.