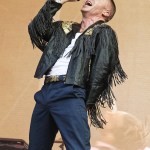 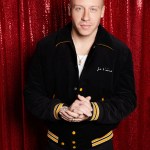 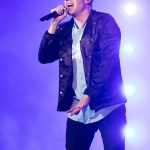 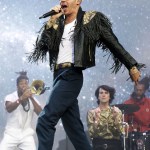 The ‘Thrift Shop’ rapper gets real about the power of music, the importance of self care, & reveals whether fans can expect new music in 2019, in an EXCLUSIVE interview.

Macklemore, AKA Ben Haggerty, has a story to tell – one that reaches beyond the parameters his chart-topping hits. Early fans of the rapper know that he’s never been shy about packing innately honest lyrics between verses, and a number of his tracks have touched upon his personal experiences with addiction, loss, and the education system. On 2009’s “The Town,” he rapped: “As a public school student I learned from my teachers, but became through my music.” It’s a message that still rings true for the rapper, as he embarks on his latest endeavor – a partnership with LIFEWTR, which aims to retain and bring back arts programming to school systems. The goal? “We’re going to reach about 10 million students,” Macklemore says in an EXCLUSIVE interview with HollywoodLife.

He goes on to explain just how pivotal his exposure to the arts was for him as a child. When reflecting on his earliest memories of music, he admits that Glenn Frey’s “The Heat Is On” left a lasting impact on him. “So, I heard that song, and shortly after that it was Digital Underground. I think I was seven-years-old, and that’s what really introduced me to rap music, and I fell in love and never looked back,” he says.

He continues, “ I wanted to be an entertainer, and I used the living room of my grandparents’ house, I used the kitchen counter. The spoon for the pasta was my microphone. You can tell how much I cook, ‘The spoon for the pasta,’ he jokes. “That was my microphone. I wanted to perform. I wanted to be on a stage, and my mom really pushed me to be creative. Not like, ‘Ben, you have to do this,’ but she just fostered that creativity in me and put me in art classes, and made sure that I was dancing. I even did ballet for a couple months. I was all over the place, and my parents really facilitated that, particularly my mom.”

Ben acknowledges that it’s thanks to his early exposure to the arts that he’s able to give back these days. “That’s why I think it’s so important coming full circle to this collaboration with LIFEWTR,” he explains. “So that kids have access to the arts and creativity is fostered in schools. Budgets are getting cut and the resources just aren’t there for so many kids. They don’t have parents that can afford to put them in art classes outside of school, so that creativity isn’t getting nurtured, and there’s not the support.”

The rapper hasn’t been shy about disclosing the details of his past struggle with addiction in his music, and tells HollywoodLife about the immense power music has had on his life. “I’ve struggled with addiction my whole life, but it kept me wanting to be sober as a teenager, because I knew that my creativity and my drug use were at odds. I knew that if I wanted to really make it in music I had to be dedicated and sacrifice everything for my art, and that drugs and alcohol got in the way of that. It helped me find my passion, he says.” Through that, it saved my life. I don’t say that in some grandiose, broad brushstroke cliché way. It truly did save my life.”

Art in school helps the youth express themselves and provides a well-rounded education. The creative mentors I had growing up helped me cultivate my craft and find a passion through the arts. But as times change, budget cuts have left many schools without the resources to continue their arts programs. That’s why I’m excited to partner with @lifewtr on their mission to #BringArtBackToSchools for 10 million students. Check out the link in my bio to see the impact that LIFEWTR had on a school in Miami. We have work to do. #ad

The rapper slips in a joke about the amount of golf he plays into the interview, but it’s hard to believe he gets any down time at all. Between being a father, hitting the recording studio, and keeping up with his work as an activist, the rapper has his plate full. “It’s a challenge. It’s definitely a challenge,” he says of balancing fatherhood and a recording career.

Macklemore had a wildly successful 2018, when he hit the road with Kesha all summer long. “For one, just being away on the road for so long at a time, particularly this last year. 2018 was a challenging one. I was gone for the majority of the year, and it was my youngest daughter, Colette, it was her first year of life. So I was there, in and out. They came out for some of it, but not nearly as much as I would like. So then I got off the road in September, and I’ve been pretty much home with the girls since,” he explains.

That being said, it sounds like Macklemore is ready to dive back into making music. “Yes. I have some collaborations coming out soon,” he reveals in the interview. “And I am starting to work on my own [music] whatever it’s going to be. I don’t want to call it an album yet, but you know, I’m starting to record ideas. I have a lot of half-finished songs that need to be turned into final songs. You know, my priority has been kind of family, self-care, a bit of a break, and now I’m kind of reemerging back into a creative space.” Following his stunning collaboration with Kesha, “Good Old Days,” which went platinum, fans have been waiting with bated breath to see more tunes from the rapper.

For now, fans across the globe can look forward to a slew of live shows from Ben. As festival season approaches, he has signed on for a number of major festivals worldwide. “I’m doing a bunch in Europe. I’m doing Lollapalooza in South America, coming up here in April, “ he says. The “Downtown” rapper also teases yet another announcement to come. “There’s going to be more. We just got another offer about 20 minutes ago. They’re just coming in.”

More than anything though, Macklemore is excited to give back through his music. In addition to his partnership with LIFEWTR, he hosts an annual residency in Seattle for children interested in learning how to record beats of their own. “This is our fifth year,” he proudly says. “I think this year it might be upwards of 60 kids that we’re going to have. Throughout the course of three weeks, they learn how to make beats, they learn how to write raps, and come together as a group. They record songs, they perform. They have panelists come in, and mentors that help them through the process. For one, kids just don’t have the resources to record, and we need to figure out how to make music in order to do it.”

“Between partnering with LIFEWTR, my own kids, the residency, touring, some TV stuff, songs coming out, it’s going to be a busy and great year, and I’m looking forward to all of it,” Macklemore adds.

You can join Macklemore and LIFEWTR in bringing art back to schools by heading to  bringartbacktoschools.com.