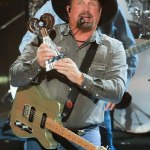 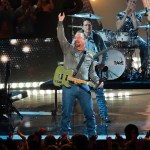 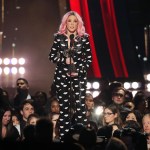 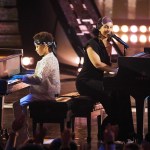 T-Pain didn’t need a mask to kick off the 2019 iHeartRadio Music Awards – but he might need a helmet, as he opened the show by recounting how he ‘headbutted’ Taylor Swift in the breast!

For the second time in his career, T-Pain, 33, hosted an awards ceremony, and judging by how he kicked off the 2019 iHeartRadio Music Awards, there are plenty more in the future. Fresh off of winning the first season of The Masked Singer, T-Pain kicked off the March 14 event from LA’s Microsoft Theater by giving a shoutout to a special guest in a crowd, Taylor Swift, 29. “Taylor, I never apologized to you. The first time we met—you’re so much taller than me, that I thought you were standing on something.

“Without looking down, I tried to stand on what I thought you were standin’ on and – bam! Headbutted your right in the boob. So sorry. That was not my intentions,” T-Pain said. Thankfully, Taylor seemed to have a good sense of humor about it, even if she did give that “awkward smile.”  (BTW, Taylor is 5’10”, while T-Pain is 5’8)

2019 is quickly becoming T-Pain’s year. After winning the inaugural season of The Masked Singer, the rapper born Faheem Rasheed Najm dropped his newest album, 1UP, which saw him collaborate with artists like Lil Wayne, Tory Lanez, Boosie Badazz and more. The iHeartRadio Music Awards show realized they also had to get him to host this year’s extravaganza. “The blessings keep rolling in. I am grateful and honored to host this year’s iHeartRadio Music Awards,” T-Pain said in statement.

“The past two weeks have been incredible and the run continues. Thank you to everyone for all of the love and support. A special thanks to the iHeart team and FOX for having me.” This marks T-Pain’s second time as an awards show host, as he helmed the 2008 BET Hip Hop Awards.

If anything, this year will change people’s perceptions of who T-Pain is when it comes to music. Often once mocked for his overuse of Auto-Tune, his win on The Masked Singer proves that he can really sing. “I was just using it to sound different,” he said of Auto-Tune while talking with NPR in 2014. “And it turned into a whole stifling thing because it was what I did. You know what I’m saying? It’s what I do. And this is my style. I’m not gonna change my style because other people are starting to overuse it. Like, that’s just weird….”

“What’s next for T-Pain? I don’t know,” he said in 2014.” I can’t say. I haven’t really made any plans. I haven’t set any goals. That way I won’t be disappointed if I don’t reach ’em. I’m kinda just letting things fall into place. And not rushing anything, just letting God do what he do.” Seems there’s a higher power at work here, as T-Pain is now bigger than ever.