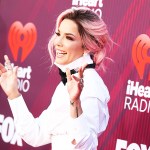 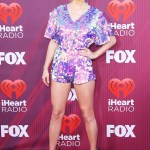 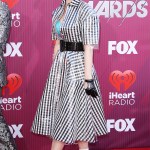 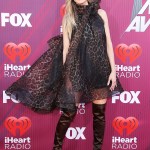 Country superstar Kacey Musgraves looked fabulous when she hit the red carpet in a David Koma dress at the 2019 iHeartRadio Music Awards.

Kacey Musgraves is known for her show-stopping red carpet style. And the 30-year-old country singer did not disappoint when she made her grand entrance at the iHeartRadio Music Awards on Mar. 14. All the stars looked outstanding, but Kacey stole the show in an emerald bodycon dress, with double-tiered ruffles, that hugged her flawless figure. The “Slow Burn” singer revealed her red carpet attire was designed by David Koma. She wore her silky brunette tresses straight and sleek, tucked behind her ears, and neutral makeup which highlighted her natural beauty. All eyes were on the six-time Grammy Award-winning star as she posed for photographs before entering the Microsoft Theater in Los Angeles.

The “Space Cowboy” songstress is set to take the stage and perform during the star-studded show. She is also nominated for Best Cover Song of Shania Twain‘s classic hit, “You’re Still The One,” which Kacey performed as a duet with Harry Styles. Other performers during the popular music awards show include a slew of superstars such as Ariana Grande, Halsey, Backstreet Boys, and Alicia Keys. Meanwhile, presenters include A-listers Katy Perry, Jamie Foxx, and Pharrell Williams, to name a few.

Just weeks after Kacey swept the Grammys with four wins for her album Golden Hour, the Texas-born beauty made sure to turn heads at the Oscars on Feb. 24. Kacey had all eyes on her in a long flowing pink tulle Giambattista Valli Couture number. The vintage gown featured several layers of pink tulle along the hemline with a matching neckline for an added dramatic effect. She oozed old Hollywood glam as she swept her dark locks back in a low ponytail and parted it in the center. Kacey certainly knows how to drum up attention as a fierce fashionista!

Make sure to check out even more red carpet arrivals in HollywoodLife’s gallery above. Stay tuned for our recap of Kacey’s performance at the iHeartRadio Music Awards when she heads inside!