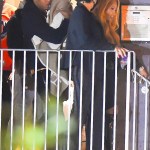 The way to a queen’s heart is through…her feet? Nicki Minaj couldn’t stop gushing about how good Kenneth Petty is with his hands, even so far as calling him…her ‘husband!’ Wait, what?

Nicki Minaj, 36, certainly raised some eyebrows when she got behind the mic for Episode 12 of Queen Radio (on Beats 1 on Apple Music.) During the live from London edition of her show, the “Chun-Li” rapper referred to her boyfriend, Kenneth Petty, 41, as her husband. This surprise promotion came while Nicki revealed just how good her bae was at rubbing her feet. “Every night when I get out of the shower,” she said, “my husband takes this really good lotion that we just bought, and he massages my feet, and rubs them. He rubs each toe individually, and the heel, and the ball of my foot, and he does it all.”

So, did Nicki and Kenneth go out and tie the knot while no one was looking, or is this a “Travis Scott calls Kylie Jenner his ‘wifey’ ” type of deal? The two were spotted walking hand-in-hand while enjoying a date night in Paris on March 8, but no one saw a sparkler on her finger. Whether or not they’ve joined the growing list of couples getting engaged in 2019 remains to be seen. However, hearing Nicki openly refer to him as her “husband” shows that this relationship is not only going strong but could very well turn into wedded bliss for these two.

Nicki’s “husband” has joined her for the European leg of her Nicki WRLD Tour (in partnership with rapper Juice WRLD) and she’s having the time of her life, a source EXCLUSIVELY told HollywoodLife.com. “Everything really is better with Kenneth by her side,” the insider said. “She feels like her whole journey makes sense now that she’s found him. And being in Europe —  especially Paris — her love makes everything more intense. It’s very much a fantasy come to life.”

Though, this fantasy European vacation turned into a bit of a nightmare when Nicki had to cancel her show on March 9 due to “technical” issues. The plug was pulled just hours before she was supposed to take the stage, and furious fans left the venue chanting Cardi B’s name. Nicki explained that “they just didn’t have the power in the building to facilitate my show. And they didn’t tell us that until three hours before the show… I wanna tell you guys that I love you dearly and I really hope to make it up very soon.”