Farrah Abraham is a pro when it comes to dating, despite being ‘kicked off Bumble’ (we’ll explain later). After taking on motherhood, multiple businesses and reality TV, she tells us if she’s ready to settle down, and what type of man she wants!

First things first. — Yes, Farrah Abraham is single. Yes, she’s on dating apps. But, she’s not looking for a serious relationship right now. While the reality star, who can be seen on MTV’s second season of Ex on the Beach, hasn’t given up on love, it’s something that’s not at the top of her priority list. “I mean, if anyone, I’ve probably made the most money off of being single my whole life. So, you’ve got to give it up to me for that,” she joked, during an EXCLUSIVE interview. Farrah was guest on the HollywoodLife podcast in New York on February 20.

“I know how to play the dating game very well,” said Farrah, who proudly uses dating apps. However, she’s sticking to one these days, Cove. — A modern-day, digital dating app that allows users to connect as desired, through text, audio and even video. And, if you’re a female user, there are perks for staying engaged, as stated on the app’s site, including, Uber Starbucks and Amazon gift cards.

“I travel, get some perks, see some new things, and these guys have some really good things going for them,” Farrah said while scrolling through the app. Speaking of dating apps, she admitted that she was “kicked out of Bumble,” a relationship app which requires women to make the first move after swiping. Why? — “For doing nothing! I was just in the friend and the business category, but they had a lot of people saying that I was a fake profile. I’m like, ‘Aren’t celebrities all using Bumble?’ So, yeah, they kicked me out and that was a mess.”

While she has met a few potential suitors using Cove, Farrah has yet to find the one, and that’s just fine with her. “I’m not giving up, but I just don’t need to date right now,” Farrah said. “I feel like my mom was putting on Christian marriage DVDs when she was over at my house. She wasn’t even engaged or married yet at the time. But, she had this whole thing that I need to date. — That’s good for her, but I also really like my alone time. I like being alone. I like focusing on my life. People change so much… So, that’s why I’m a little bit like, ‘I don’t need to date. I don’t think they know who they are yet.’” 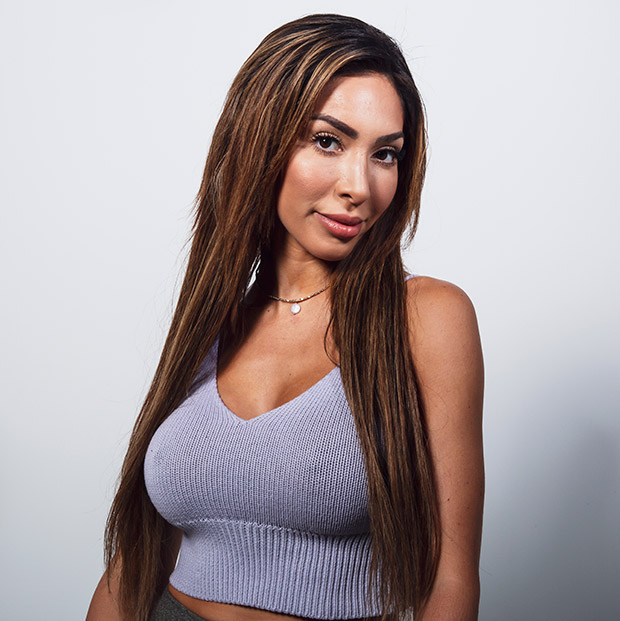 As for who she would date? — “I’m open to probably dating a director or something of that nature. I mean, the highest I could go is like a producer,” she said. But, Farrah needs someone who will level up. “They have to help you rise higher and I would say most of the little pond that I swim in right now, they do not help me rise higher… you need to be a team player.”

And, who wouldn’t make the cut? — “I would not date anyone from my productions or anyone from talent world. No sports players, no entertainers.”

Farrah can be seen on the first-ever reunion show for MTV’s Ex on the Beach when it airs, after her debut episode on March 21. If you haven’t seen the show, it’s about a group of famous singles from various reality TV shows (Teen Mom, Bad Girls Club, The Bachelorette, The Challenge), who head to a tropical island for a chance at love. However, paradise isn’t so sweet when their exes show up. The famous contestants are then forced to decide whether to stick with their exes or move on without them.

While the show’s description makes sense, Farrah explained that Ex on the Beach forces contestants to really think about what kind of “dater” they want to be. “I’m not like, Jordan Woods,” she said in reference to “dating other people’s boyfriends.” As you may know, Woods was involved in a cheating scandal back in February, when it was discovered that she had hooked up with Khloe Kardashian‘s now-ex, Tristan Thompson.

“I’m not cool with it… And, the girls [in the Ex on the Beach house], they love that. In the house, they’re like, ‘Oh I got your man.’ Like some girls feed off that. So, you’ve got to ask yourself what kind of dater you are. Are you going to take someone else’s man, or are you going to go find some new territory and hunt that out?”, Farrah explained.

In the episode, titled “Ex, Lies and Polygraph Tape”, Farrah returns to find out once and for all if she is truly over her ex, Simon — or as she would call him, “Slimon.” The truth will be revealed when a lie detector test forces the entire house to take an honest look at their relationships.

“Simon showed up, yes, thee Simon showed up,” she said with a smirk. Farrah’s ex appeared frequently on Teen Mom, where she “broke up with him many times” while she was a cast member on the show.

But, after that saga, and then revisiting her relationship on Ex on the Beach, Farrah admitted that she learned a lot. “I can’t have any regrets about it,” she said, adding that the outcome made her realize her fate. “We’ll see more as this season unfolds, because there’s still a lot of lie detector tests, and some fun other people showing up.”

As for what she hopes to see unfold when the reunion airs? “I hope my ex doesn’t show up,” she said, laughing. “You know, the producers, they don’t tell me anything anymore, which I prefer because I just like to be as surprised and just enjoy whatever is there!”