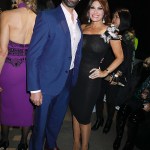 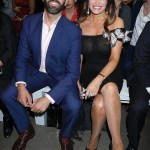 Kimberly Guilfoyle celebrated her 50th birthday in style when she went out for an impressive dinner in Mar-a-Lago on Mar. 9 with the Trump family, including President Donald Trump and her boyfriend Don Jr.

Kimberly Guilfoyle went all out for her 50th birthday on Mar. 9! The girlfriend of Donald Trump Jr. celebrated the milestone at a fancy dinner in Mar-a-Lago with not only her beau but also his father, President Donald Trump, 72, who is on vacation there with Melania Trump, 48, and their son, Barron, 12. Some other high-profile guests at the dinner included Sen. Rand Paul‘s deputy chief of staff, Sergio Gor and RNC co-chair Tommy Hicks. Kimberly, who is working on Trump’s 2020 presidential reelection campaign, took to Twitter to retweet a photo, which was originally tweeted by conservative author Charlie Kirk, who was also at the dinner, of her smiling at the table on the special night. “A great group of patriots and our incredible President @realDonaldTrump! Thank you for another record breaking low unemployment for Hispanics. What a great way to celebrate a birthday weekend. #MAGA #KAG @DonaldJTrumpJr @charliekirk11 @SergioGor @TommyHicksGOP,” Kimberly captioned the tweet.

In addition to Kimberly’s night out on her actual birthday, the brunette beauty celebrated a few days early on Mar. 7, when she attended a dinner in New York City with Don. Jr., his brother Eric Trump, Eric’s wife Lara, and other guests. In videos she shared on Instagram, the birthday girl was all smiles when a waiter brought out three cakes with lit candles for her to blow out. “Amo a mis amigos!! Best of all birthdays gracias mi amor ❤️@DonaldJTrumpJr and @LaraLeaTrump@EricTrump 💕 🇺🇸 #OmarHernandez#omarsatvaucluse 💃🏻🎉🎁🎂,” she captioned the videos.

Kimberly and Don Jr. are known for happily attending a lot of events together so it’s no surprise that Kimberly’s birthday celebrations would be another one for the books.