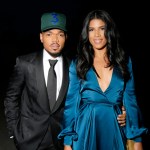 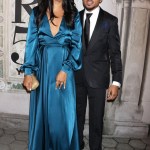 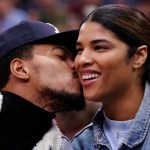 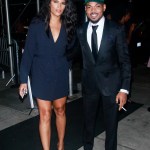 Congratulations are in order for Chance The Rapper and longtime partner Kirsten Corley – the two reportedly just got married!

Grammy Award-winning musician Chance The Rapper, 25, said “I do” to his girlfriend since 2013, Kirsten Corley, 25, according to E! News. The happy couple got married on March 9 at the Pelican Hill Resort in Newport Beach, California, surrounded by 150 guests.

“The decor was all white, with big arrangements of white roses lining the aisle and scattered white petals where the bride walked down to meet her groom,” an eyewitness from the wedding said. “The bride, Kirsten, wore a strapless white dress and Chance wore a white tux with a black bow tie. It was a romantic ceremony and a string quartet played as they entered. In the middle of the ceremony, their little daughter Kensli [3] ran up and Chance picked her up and held her. It was very sweet and loving to watch.”

Celebrity guests included Keeping Up with the Kardashians star Kim Kardashian, 38, her husband, rapper Kanye West, 41, and Dave Chappelle, 45. “After the ceremony, Kim and Kanye hung out with Dave Chappelle on the lawn,” the source continued. “They were all laughing together and having a great time. They posed for photos and Chance came over to chat. They congratulated him and gave him hugs. Kim and Kanye were offered some champagne. Kim passed, but Kanye took a glass. Then they walked inside together for the reception. It looked like they were very happy to be there and to see their friend get married. They both never stopped smiling.”

The couple got married quickly after getting engaged – Chance asked Kirsten to marry him on July 4, 2018 at an Independence Day barbecue, with their daughter present. He asked, “Kirsten Katrina Corley, will you make me a man and be my wife?”

While the couple originally started dating in 2013, they took a break from May 2016 to Jan. 2017 – but they’ve been back together ever since then! Even though Kirsten has kept a low profile (she does not have public social media accounts), we’ve seen her pop up on Chance’s throughout the years. We’re absolutely thrilled for the married couple!