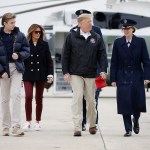 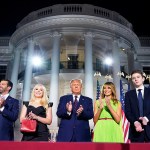 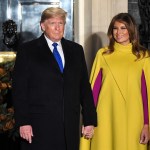 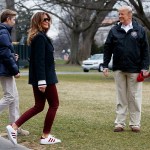 Well, it looks like someone had a growth spurt. Barron Trump appeared to tower over both his parents as they were photographed on the White House lawn on March 8.

We caught a rare sighting of Barron Trump, 12, on March 8, and you will not believe how much the youngest son of the First Family has grown. As he was spotted on the white house lawn alongside his parents, Donald Trump, and Melania Trump, he appeared to tower over them both! Apparently, it was a day off from school for Barron, who took the full Friday to embark on the trip with mom and dad. First stop for the trio was a visit to tornado-stuck Alabama to witness the recent devastation in person. Then, it was off to beautiful Mar-a-Lago in Palm Beach, Florida for some down time. In khaki pants and a navy blue puffer jacket, Barron looked cozy as he prepped for the trip to the warm-weather state.

Almost as surprising as catching a glimpse of young Barron, was seeing Melania in such a low-key look. The FLOTUS traded in her signature sky-high heels for a pair of ultra casual sneakers. Donald’s wife rocked a pair of Adidas Superstar sneakers for the trip. The sneaks, which retail at just about $80, perfectly matched her maroon pants as she stepped out that morning. In the no-nonsense look, it seemed like Melania was more than ready for some R&R on their family vacation.

Both Melania and Donald appeared to be in great spirits as they readied for their trip. The First Lady flashed a bright smile as she stepped out for the family affair, as did Donald. One could not quite say the same for Barron. Their son looked subdued as photographers snapped his photo on the white house lawn. However, Donald reportedly cracked for his youngest son as they readied for their trip. “He’s getting big!” the president reportedly exclaimed, making note of his son’s height.

Who would have thought that Barron would be towering over both his parents at just 12-years-old? It’s no wonder that even Donald himself took note of his shocking growth spurt.