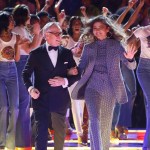 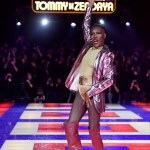 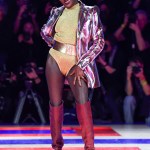 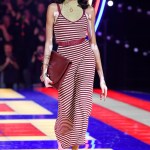 Grace Jones, 70, totally stole the show at the Tommy X Zendaya collection show during Paris Fashion Week on Mar. 2. While the legendary singer started her musical career in the ’70s after working as a model, Grace just proved that she’s still got it on the catwalk in her 70s. Wearing a tight gold bodysuit on the runway, the “I’ve Seen That Face Before” singer paired her gilded outfit with a rainbow jacket. Not only did she look flawless, but Jones closed out the whole show by dancing to her hit song “Pull Up to the Bumper” with the show’s co-designer Zendaya, 22, at the end of the runway.

Also joining Grace on the catwalk was Victoria’s Secret model Jourdan Dunn, 28, who slayed wearing a transparent, glittery glown. And at one point during the show, Winnie Harlow, 24, wore a stunning gold dress with a bow-style design. Meanwhile, we reported earlier how so many models came out to support Zendaya’s first fashion collaboration with renowned designer Tommy Hilfiger, 68. In fact, former Hilfiger collaborator Gigi Hadid, 23, was in the front row to show her support.

The ’70s-inspired show, which has been almost unanimously deemed a success, was long-awaited after it was first announced on Oct. 16, 2018 that Zendaya was going to the new global ambassador for Tommy Hilfiger. “Fashion is more than just wearing cool clothes,” Zendaya said in a press release at the time. “It’s a way to celebrate self-expression and individuality, which is extremely empowering. This is why I am proud to partner with Tommy Hilfiger.”

Following the show, Zendaya tweeted, “I’m still in shock and so emotional and moved by this show…I’m speechless. Thank you a million times ✨ @TommyHilfiger #TommyxZendaya.”