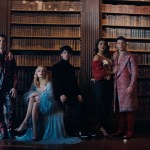 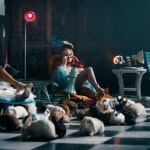 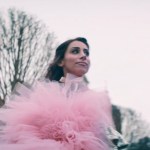 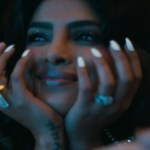 This is an SOS! The Jonas Brothers are back, & their 1st track , ‘Sucker,’ features some new faces — the JoBros’ ladies! Watch Priyanka Chopra, Sophie Turner and Danielle Jonas prance around a castle with the band.

Yep, you heard that right! After six years away, the Jonas Brothers are back with a brand new track. The Jobros, AKA Nick, Kevin, and Joe Jonas, blessed fans with both a song and video on March 1, entitled “Sucker.” The boy band’s comeback video holds a wild display of colorful fashion choices, fitting for the Victorian era, as the guys rock out in a lavish castle. Go big or go home! The guys turned up the heat as their ladies jammed right alongside them, who also went big in voluminous designer gowns! Priyanka Chopra cozied up to Nick’s mic, Sophie Turner showed off her dance moves for fiancé Joe, Danielle Jonas twirled under Kevin’s arm, and those were just the highlights — the ladies were main players throughout the music video!

One can only hope we will see the guys belt out the song during their appearance on Carpool Karaoke. The trio is set to join James Corden for a week-long takeover on The Late Late Show, and their sing-along is just one of the treats we will be seeing! In addition to the segment, fans will get to see the first official live performance of “Sucker” on the show! Tune in Monday, March 4 thru Thursday, March 7 to catch the action.

Why now for the reunion? HollywoodLife EXCLUSIVELY learned why the three guys felt like it was the perfect time to get the band back together. “All the brothers are all in a great place in their lives where they all feel that family has always been first but it definitely seems more important even now,” a source close to the brothers told HL. “They are all in the relationships that they will be in for the rest of their lives and they thought that what better time than now to literally get the band back together. The money is too good and the opportunity to collaborate and put the final stamp on their legacy was also too much to not dive into. They finally can do the band the way they always wanted to do it and that is very special for all of them to take part in. They are beyond excited for it all to happen.”

Don’t miss the Jobros hot new video above! Don’t get us wrong, we loved DNCE and Nick’s hit-filled solo career, but nothing is quite the same as having the gang back together!