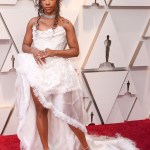 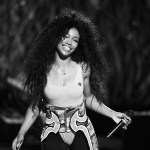 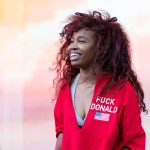 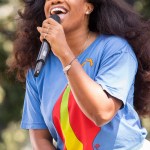 Close call! SZA was so busy taking pics of her friend with her smart phone that she backed into a stairwell and accidentally fell all the way to the ground. We’ve got the wild video and if she’s okay.

Ever get to caught up in the moment when taking pics or filming someone with your phone that you lose track of your surroundings? That happened to SZA on Feb. 28 and she ended up tumbling down a flight of stairs as a result! The 28-year-old singer — real name Solána Imani Rowe — was seen taking selfies of herself in front of a mirror in an empty room. Her pal was videotaping her in action as she squatted down and did some other poses. Then the “All the Stars” songstress decided to take pics of her friend and that’s when the accident happened.

SZA’s seen moving towards the entry to a stairwell, even bending down to squat on the top step while filming her friend. That’s when she lost her balance and is seen tumbling backwards, ending up all the way to the bottom of the stairs and her pal actually managed to get it all on video!  She could have been seriously hurt as the stairs were made of wood and she landed on a hard, tile base at the bottom. That’s not a nice, carpeted landing.

Amazingly, SZA kept a big, bright smile on her beautiful face even after her scary mishap, assuring two women “I’m okay. Yes, I’m fine,” repeatedly. It probably helped that she had a big heavy coat on and loose pink sweatpants that would have made her fall more fluid and the oversized jacket helped protect her from getting bruised up.

#SZA took a fall down the stairs. 😂 #rapalert

A woman at the bottom of the stairwell can be seen scolding the friend as the pal is still rolling on the action. “CJ Adams you are still recording her fall?” she asks with shock in her voice while her friend replies back “I was recording before she fell and I got it all which is crazy.” Yes it is! Thank goodness SZA’s okay cause that was one nasty tumble!