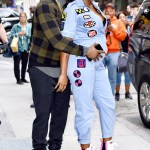 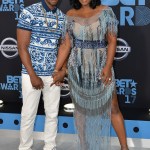 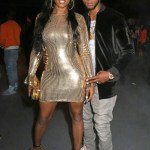 Finally! Fans have been waiting to catch a glimpse of Remy Ma & Papoose’s baby girl, & it was so worth the wait! The little one just got her 1st taste of fame during an appearance on ‘The Real.’

At just two months old, the daughter of Remy Ma, 38, and Papoose, 40, is already loving the spotlight! The baby girl made her first television appearance on Feb. 28 during an episode of The Real, and she had everyone on set fawning over her. Hosts Loni Love, Adrienne Bailon, fashion expert Jeannie Mai, and actress Tamara Mowry-Housley could not stop cooing over her, as the newborn’s parents revealed they’ve  nicknamed her “Golden Child,” which is only fitting after seeing how she lit up the room! As to her true, given name, that remains a secret!

The cutest part of “Golden Child’s” first talk show appearance may have just been her outfit. Remy perfectly matched her own ensemble to the baby’s! The mother-daughter duo both donned head-to-toe white that was covered in an array of colorful flowers and both rocked gold accessories. Remy wore a gold plated belt around her waist, and dressed her baby in metallic gold shoes. The only difference between mother and daughter’s ensembles was Golden Child’s included a bright purple headband in her hair. Two-months old and she’s already accessorizing to perfection!

The TV appearance marks the first time we got a clear shot of the couple’s daughter, although we did get a teaser photo on Christmas day 2018. At the time, Remy gave us a small glimpse of her little one via an Instagram snapshot.  While the baby’s back was to the camera and her face couldn’t be seen, we did notice that she had a full head of hair — and look how her hair has continued to grow.

It’s nice to see both Remy and her baby girl looking so healthy after what was a tough delivery process. Remy gave birth to her daughter on Dec. 14, but recovery was not an easy one. After losing too much blood in the delivery room, the reality star required a blood transfusion. However, her man Papoose shared the sweetest message of support at the time. “After overcoming such a tough labor/delivery my wife breast feeds our child, around the clock,” Papoose wrote on Instagram two days after his daughter’s arrival. “I’m so amazed by her strength, courage & motherly touch. @remyma Thank you babe! This is all a dream come true! #thegoldenchild Daddy got you forever. You are the definition of beauty,” he wrote on Instagram.