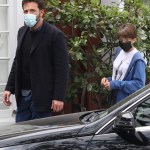 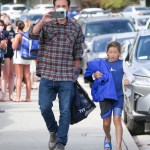 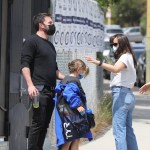 Jennifer Garner and Ben Affleck are in a good place! She’s happy her ex has remained sober since his most recent stint in rehab for alcohol addiction in March of 2017. Jen’s enjoying how positive and present Ben is, and their family has never been closer!

Jennifer Garner, 46, and Ben Affleck, 46, haven’t been in this good of a place in a long time. The Hollywood exes, along with their three children, daughters Violet, 13, and Seraphina, 10, and son, Samuel, 7, have been spending a ton of time together since Affleck vowed to remain sober in March of 2017 — after he completed his third stint in rehab for alcohol addiction. After the exes were spotted on a stroll in Santa Monica on February 27, HollywoodLife has learned that Affleck’s struggles have made them stronger as a unit.

“Ben‘s sobriety is bringing the family closer together,” a source close to Affleck and Garner tells HollywoodLife EXCLUSIVELY. “Jen is proud of the hard work Ben is putting into his recovery and as a result, they are all spending more time together as a family. The kids loving having both mom and dad around, and Ben loves it too. He still has a lot of love for Jen and the family inspires him to be the best person he can be. It feels good for him to be present for all of them and Jen loves it too. She loves seeing the best version of Ben again.”

Affleck struggled with alcohol addiction for years. In March 2017, he announced he had successfully completed this third stint in rehab, and was working toward a positive recovery. “Ben has been extremely focused on his sobriety. He knows his kids are getting older and look up to him and he wants to be there for them completely,” the source reveals. “Jen has made it clear to Ben that she is here for him and happy to do anything and everything she can to support him. Their family comes first to her and she knows Ben will always be a part of her life.”

The insider went on to explain that Affleck is in a good place concerning his sobriety. “He is fighting his issues head on and he is doing as great. And, Jen couldn’t be happier. She always knew he was a great father, but now she sees the great person he is because of how hard he’s been working on himself.”

But, don’t get any ideas about a romantic reconciliation, as our source says Affleck’s positive recovery will not bring them back together. “Not at all,” the insider admits. “They’ve moved on, but they will always be a part of each others lives and she is happy that this is the Ben she is dealing with!”

As the source said, both Affleck and Garner have moved on. The actress is dating businessman John Miller and Affleck is reportedly back on with his Saturday Night Live producer girlfriend, Lindsay Shookus. Nonetheless, that hasn’t stopped the pair from successfully co-parenting their children.

“She is a mother first and foremost and would do anything for her kids,” the source says of Garner. And, Affleck knows that. “Jen is the kindest, most down to earth woman and Ben sees and appreciates that.”]

As you may know, Affleck and Garner separated in 2015 after 10 years of marriage. The pair officially filed for divorce in April of 2017, and finalized the divorce in October 2018.