Brie Larson looked absolutely fierce in a gorgeous blue Valentino gown at the London premiere of ‘Captain Marvel.’ We’ve got pics of the bold design, which featured sexy side-cut outs.

If Brie Larson’s first red carpet premiere for Captain Marvel is any indication, we’re going to be in for quite an incredible fashion ride in the lead-up to the film’s March 8 release. The 29-year-old absolutely wowed at the film’s London premiere, held at the Curzon Mayfair on February 27. She’s swung for the high-fashion fences and hit a home run in a custom electric blue Haute Couture gown and cape with gold lining, which was personally designed for her by Valentino Creative Director, Pierpaolo Piccioli. As Marvel’s first female stand-alone super hero, Brie deserves such a powerful dress.

The Oscar winner’s gown was slung very low off her shoulders, exposing some cleavage. The fabric then wrapped around her arms and across her open back. The bodice of her dress was basically an upside down triangle, as the fabric became less and less before reaching her waistline, showing off her incredibly toned abs. The dress then opened up to a full skirt with a dramatic cape that she wore down around her elbows to show off the look on the red carpet for photographers, but later put over her shoulders to greet fans.

One of whom was an adorable eight-year-old girl named Lilly, who was dressed in a full Captain Marvel costume. Brie was heard asking her “Are you running the carpet tonight?” before the two engaged in a conversation. Lily was there as a guest of The Female Lead, which is “a non-profit organization dedicated to making women’s stories more visible and offering alternative role models to those ever-present in popular culture.” The group posted a photo of Brie and Lilly on Instagram that read, “Just two Captain Marvels. We arranged for 8-year-old superstar Lilly to meet her real life superhero @brielarson at the #captainmarvel premiere this evening!” When Marvel UK and Ireland tweeted out a photo of the two together, they captioned the pics “Someone’s had a good night #captainmarvel,”which Brie retweeted, writing, “She’s my hero!” 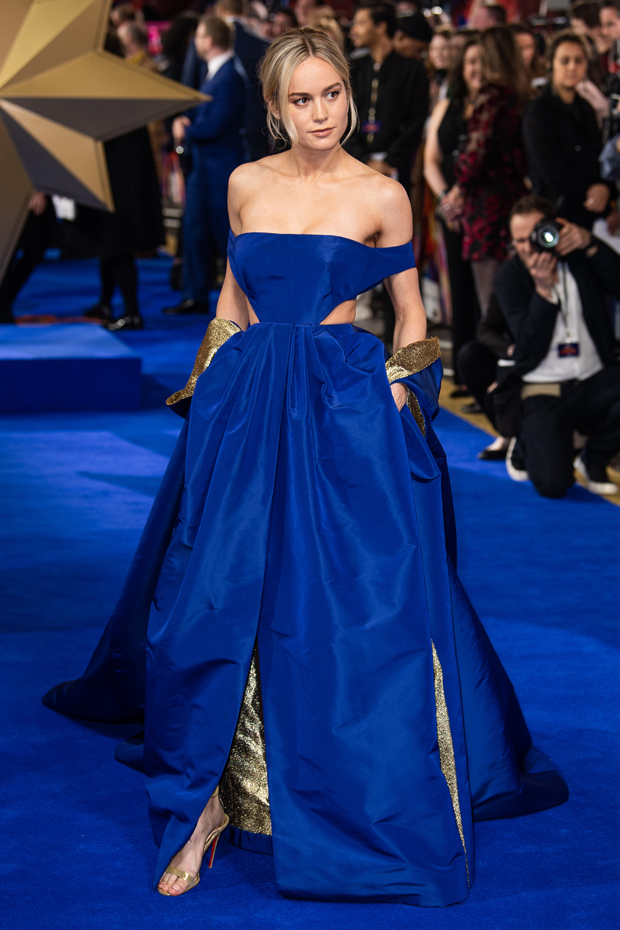 Brie has absolutely been crushing her fashion game lately. In addition to this stunning blue and gold Valentino gown in London, she wore a skin-tight shiny silver halter dress with a high left leg slit to the 2019 Oscars on Feb. 24. She looked as though her body had been dipped in silver paint, it fit her so well. Then for the Vanity Fair after party she changed into an eye-popping bright red one shoulder dress by Celine that also hugged her figure. We can’t wait to see Brie’s style game unfold as the Captain Marvel press tour rolls along.