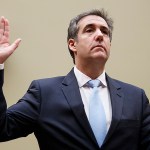 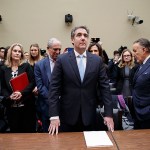 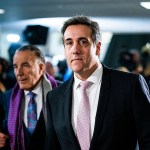 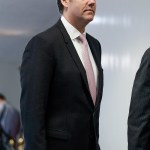 Aubrey O’Day casually mentioned on Twitter in the middle of Michael Cohen’s testimony that — guess what? — he approached her to stay quiet about her alleged affair with Donald Trump Jr. Wait, WHAT?

The plot thickens! In the middle of live-tweeting Michael Cohen‘s congressional testimony, Aubrey O’Day dropped a bombshell: President Donald Trump‘s former lawyer also allegedly approached her about her affair with his son! If you recall, the Danity Kane singer alleged that she once had a longterm affair with Donald Trump Jr. while he was still married to wife Vanessa Trump — the mother of his five children.

As it turns out, Vanessa wasn’t the only person who found out about the sexts from 2012 and wasn’t happy. Just as he allegedly did for the president, it appears that Aubrey is claiming that Cohen also attempted to silence her about the affair. Aubrey’s tweet was posted while Cohen was giving his opening statement at the February 27 statement, which heavily focused on the hush money payments he made to Stormy Daniels, the former porn star who claimed she slept with Trump in 2006. Aubrey did not elaborate further, despite pleas from her fans in the comments to spill the tea. She did keep live-tweeting the hearing, though. Priorities!

Cohen provided with his testimony the copy of a check made out to him from Trump for $35,000. He claimed that the check, dated August 2017, was one of 11 installments to reimburse him for paying off Daniels and Playboy playmate Karen McDougal with his own money. He also apologized to First Lady Melania Trump for lying to her about her husband’s affair. He told the House Oversight Committee, “Mr. Trump is a conman. He asked me to pay off an adult film star with whom he had an affair, and to lie to his wife about it, which I did. Lying to the First Lady is one of my biggest regrets. She is a kind, good person. I respect her greatly – and she did not deserve that.”

Cohen came to me also.

Daniels was also watching the testimony. Though Cohen attacked her publicly multiple times, to the point that she sued him for defamation, she released a statement saying that she was “proud of him.” The statement reads, in part, “Michael, I’m proud of you for finally beginning to tell the truth about what you did, and trying to repair some of the harm you have caused. I can hear the pain and regret you feel for betraying your family and your country. My heard goes out to you and your family… Thank you for having the courage, at long last, to begin to tell the truth. I hope that someday soon your family and mine can both leave this nightmare behind.”