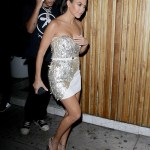 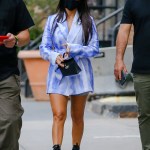 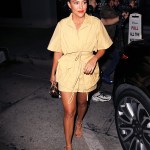 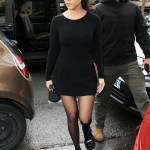 Meek Mill is totally crushing on Kourtney Kardashian! The 39-year-old took to Instagram to share some sexy new pics with her sisters, Kendall Jenner and Khloe Kardashian, on Feb. 25, and Meek couldn’t help but show her some love. In one of the pics, Khloe and Kendall grab Kourtney’s butt while she poses with her back to the camera in a completely sheer jumpsuit. Her backside is fully visible in the image, and Meek definitely took notice. “Ass Phat in the second pic,” he commented, along with a ‘shrugging’ emoji. No shame!

After Meek left his comment, hundreds of fans began weighing in about his flirtatious message, with many even urging Kourtney to go after Meek! “Get you a Meek Mill,” one person wrote, while someone else added, “Here for it.” Other praised Meek for leaving such a bold message on Kourtney’s pic, and of course, there were some haters as well, who trolled him and said he doesn’t have a chance with Kourtney.

Kourtney has been single for quite a bit of time now — she ended things with her last boyfriend, Younes Bendjima, in July 2018. Although she’s been romantically linked to quite a few guys since then, nothing serious has transpired, so Meek may just be shooting his shot at just the right time! Of course, even without a relationship, the reality star has her hands full. After all, she’s a mom to three kids with her ex, Scott Disick! Plus, there’s never a shortage of family drama when it comes to the Kardashians!

Smile for the camera ✨

Currently, the drama is surrounding Khloe, who recently broke up with her boyfriend — not to mention, the father of her child — Tristan Thompson, who allegedly hooked up with Kylie’s best friend, Jordyn Woods. Luckily, Khloe has had her sisters and her daughter to help keep her mind off the horrible situation, but she’s still been posting cryptic messages on Instagram that make it clear that the scandal has left her devastated.