Kim Kardashian’s known for her extraordinary looks — but her latest outfits at the Thierry Mugler exhibition on Feb. 25 may have been her wildest ensembles yet! See her full vintage Mugler looks, where she stunned in an all-white pleated corset!

Kim Kardashian West was a Greek Goddess at the Montreal Museum of Fine Art’s Thierry Mugler: Couturissime Exhibit on February 25! The Keeping Up With The Kardashians star, 38, stunned in two vintage Mugler looks from the #MuglerArchives 19XX collection during her trip to Canada. For her first look, Kim channeled Wonder Woman, in a gold breastplate corset with a toga-style, sheer dress underneath. Her second look was an all-white, strapless mini dress that featured a pleated corset.

While her revealing ensembles stole the show at the exhibition, Kim’s glam squad made her sure her hair and makeup were just as striking as her looks. Her good friend and longtime makeup artist, Mario Dedivanovic used all KKW Beauty products on Kim’s face. For her first look, Kim’s eyes sparkled in her Brightening Powder in shade Brightening 2. Her cheekbones, forehead and jawline were contoured to perfection with KKW Beauty Crème Contour Sticks in Dark. Other products Dedivanovic used on Kim’s face included: KKW Beauty KKW x MARIO 10 Pan Eyeshadow Palette; Ultralight Beams; Powder Contour and Highlight Palette; Crème Lip Liner and Lipstick; and, KKW x Mario Super Nude Gloss.

“Kim’s look was a neutral-toned Grecian-inspired dress which translated into her glam for the evening,” according to a press release from the event. “Mario Dedivanovic complemented her effortless, tousled updo and gold corset with a bronzed and glowing makeup look.” 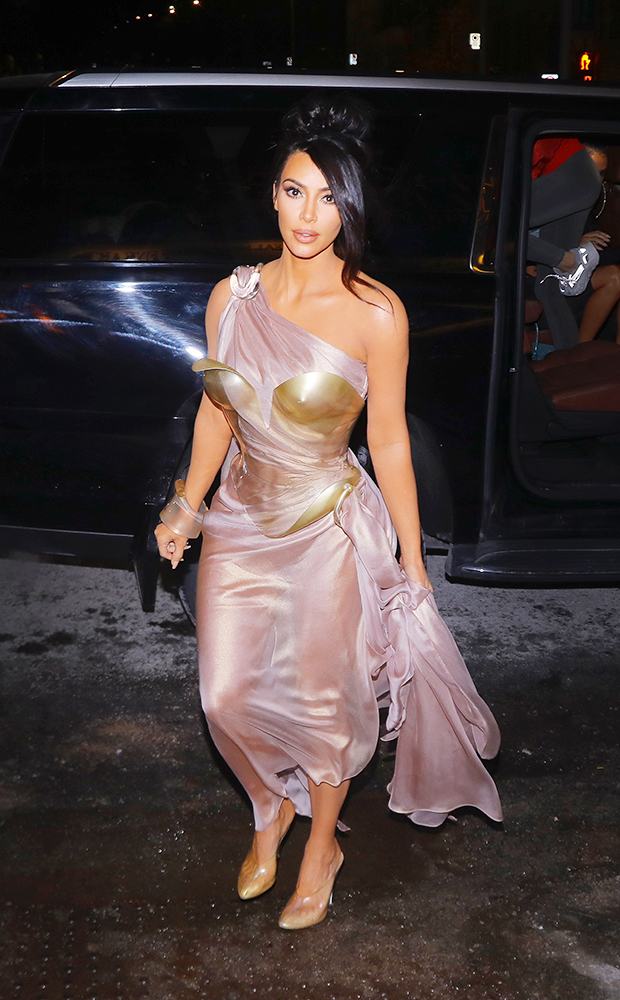 Kim Kardashian wears a vintage Thierry Mugler look as she arrives at the Thierry Mugler exhibition opening at the Montreal Museum of Fine Arts in Montreal, Canada on Monday, February 25, 2019. (Photo credit: SplashNews.com)

Meanwhile, her hairstylist, Cesar DeLeon Ramirez was responsible for her two intricate up do’s. The first, which complimented her gold breastplate corset, was “90’s inspired” and put together using IGK Hair products, Ramirez said on his Instagram story. He used a “#nextlevel build-able, non-crunchy volumizing mist (at the root) infused with Nordic Cotton Extract to visibly thicken the hair for touchable body and lightweight shine.”

Ramirez then used “a lot” of “#downandout” dirty spray, also by IGK Hair, which is a texturizing spray that gives the perfect amount of morning-after grit and piecey separation,” he described on Instagram Stories.

Kim Kardashian in a second Thierry Mugler vintage look while inside the Thierry Mugler exhibition opening at the Montreal Museum of Fine Arts in Montreal, Canada on Monday, February 25, 2019. (Photo credit: SplashNews.com)

Kim’s night out with Mugler came just a few days after she made headlines for yet another sultry look by the famous designer. She narrowly avoided a nip split in a cut-out black Mugler dress while at the Hollywood Beauty Awards on February 24. The 1998 look featured criss-cross cut-outs across Kim’s chest and upper torso that barely covered her breasts.