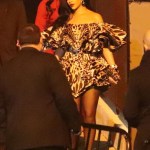 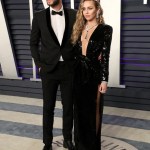 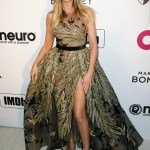 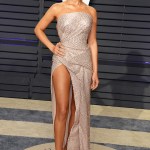 Taylor Swift, 29, can do no wrong! The singer and songwriter has been making select appearances during the 2019 award season — she presented at the Golden Globes in January, and hit up a BAFTAs afterparty in London on Feb. 10 — but she pulled out all the stops On Oscars night Feb. 24. Taylor skipped out on attending the main show with her man, Joe Alwyn, but she discreetly showed up for after-parties, and looked beyond amazing! The singer wore a strapless fringe gown, paired with open-toed nude heels. She completed her look with her hair pulled back into a ponytail and — of course — a bold red lip. CLICK HERE TO SEE A PHOTO OF TAYLOR’S OSCARS AFTER-PARTY LOOK.

Taylor’s look was styled by Joseph Cassell, with her gorgeous and glowing makeup look courtesy of Lorrie Turk, and her hair styled by Jemma Muradian. In an attempt to keep a low-profile, Taylor passed on walking any red carpets for the after-parties, but she was caught by some attendees on video once she was inside. In one clip, she could even be seen with her arm around Joe! The two are extremely private about their relationship, and have never even walked a red carpet together in the two and a half years they’ve been dating.

However, we have seen the pair start popping up together more and more lately. They attended a pre-Oscars party together on Friday, February 22, and although they did not pose formally for photos, fans captured them inside and posted the pics to social media.

Meanwhile, Taylor’s weekend in L.A. also included a surprise drop-in at a fan’s engagement party, where she sang “King Of My Heart” acoustic! She is seriously so amazing!