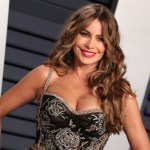 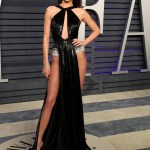 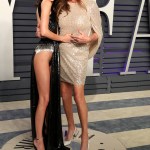 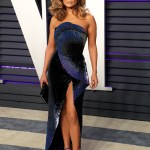 Emily Ratajkowski knows how to turn heads on the red carpet — and that’s just what she did at the Vanity Fair Oscars after-party on Feb. 24! Check out her amazing look here.

Fitting for March cover star of Harper’s Bazaar Ukraine, Emily Ratajkowski continued to uphold her vogue image in a stunning strapless dress at the Vanity Fair Oscars after-party! Emily, 27, graced the party’s red carpet on Feb. 24, and we’re obsessed with every detail of her gown. The nude-colored ensemble featured a lace skirt and ruffled detail around the model’s waist. She completed her look with her hair pulled back into an updo, with a middle part and sleek bangs falling down the side. She wore dramatic eye makeup and a pink lip, along with a diamond necklace, too.

Unlike last year, Emily’s husband Sebastian Bear-McClard, 31, wasn’t with her at the Oscars after-party. The pair attended the 2018 Vanity Fair after-party as fresh newlyweds, but she flew solo at the event this time around. However, the pair celebrated their one year anniversary one day prior to the Oscars, Feb. 23! Luckily, Emily had tons of friends to hang out with at the bash, and she looked absolutely FIERCE!

Emily’s Oscars dress adds to the many designer fits we’ve seen the runway model rock this February! She booked a gig during New York Fashion Week, and shocked everyone when she donned a pixie wig with an avant-garde fringe for Tomo Koizumi’s show on Feb. 8. For the outfit itself, Emily wore a dress heavy on the ruffles, which fans compared to a loofah!

Emily joined a crowd of partygoers who rivaled in other show-stopping looks. Kendall Jenner showed up to the function in an insane double-slit gown, while Sophie Turner was stunning in a shimmering gold ensemble. Click through the gallery above to check out these looks and more!