Rami Malek won his first Oscar in the Best Actor category for ‘Bohemian Rhapsody,’ but before he took the stage for his remarkable speech, he smooched his GF Lucy Boynton.

We’re always waiting for someone to get political, or say something incredibly inspiring at the Oscars after their win, and it has happened! After Rami Malek won his first Oscar in the Best Actor category for his role of Freddie Mercury in Bohemian Rhapsody, he planted a big smooch on his girlfriend and co-star Lucy Boynton before calling her “the light of my life” in his acceptance speech. Once Rami got to the stage, after wiping Lucy’s lipstick off his lips, he thanked his mom and revealed that while his “dad didn’t get to see me do any of this, I think he’s looking down on me right now.”

Rami continued, “This is a monumental moment and I am so appreciative to all of you who have given me a hand to getting here. People who took a chance on me… Thank you Queen, thank you for allowing me to be the tiniest part of your phenomenal and extraordinary legacy. I am forever in your debt.” He thanked his cast and crew, saying, “I love you, you are my equals, my betters, I could have never been here without you.” Then, Rami revealed that he would love to tell himself as a child that “one day this might happen to him.” “I think his little curly-haired mind would be blown. That kid was struggling with his identity, trying to figure themselves out, and now we mad a film about a gay man and an immigrant who lived his life unapologetically himself,” Rami said, clutching his Oscar. “The fact I am celebrating him and this story is proof that we’re longing for stories like this. I am the son of immigrants from Egypt, i am first generation American and my story is being written right now. I could not be more grateful to each and every one of you who believed in me. This moment is something I will treasure for the rest of my life.”

Before signing off, Rami had a message for his love, his girlfriend. “Lucy Boynton, you are the heart of this film. You are the light of my life. You have captured my heart.” 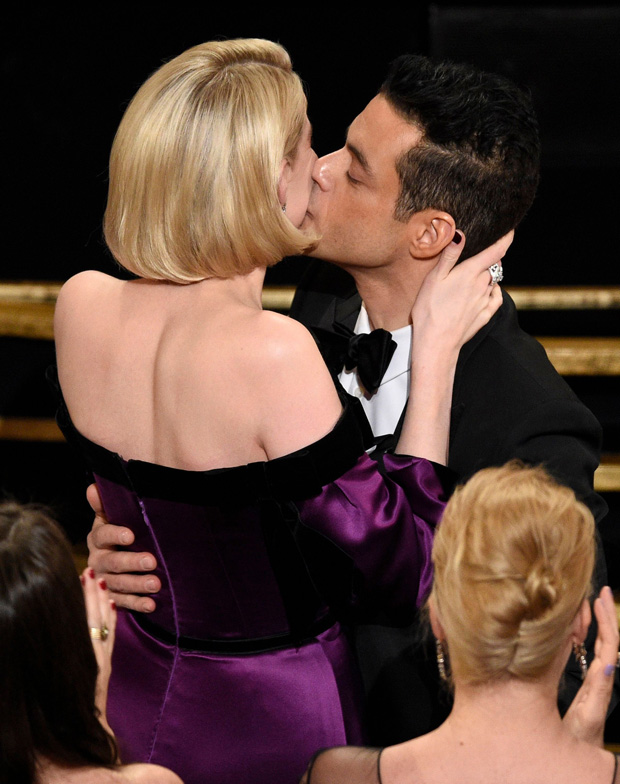 Last year was a remarkable year in Hollywood, with the rise of the #MeToo and #TimesUp movement, surrounding sexual harassment and abuse accusations against industry giant Harvey Weinstein. Frances McDormand‘s win for Best Actress also came with an award-winning, viral speech that was perfect for the times. The 61-year-old actress who won for her role in Three Billboards Outside Ebbing, Missouri had the crowd roaring while she called for equality in Hollywood, behind the cameras. “We all have stories to tell and projects we need financed,” she said. “Don’t talk to us about it at the parties tonight. Invite us into your office in a couple days, or you can come to ours, whatever suits you best, and we’ll tell you all about them.”  She finished her speech with two words that became incredibly important and viral: “inclusion rider,” which is “something actors put into their contracts to ensure gender and racial equality in hiring on movie sets,” Whitney Cummings defined on Twitter after the fact. We love a great speech, and there is sure to be many more this evening, we’re just getting started!