Michael B. Jordan just won the Oscars! The ‘Black Panther’ actor brought one lucky lady as his date to the awards show on Feb. 24 — his mother, Donna! See the adorable red carpet photo of the mother-son duo and prepare to melt!

Michael B. Jordan brought his mother, Donna to the Oscars and we can’t handle the cuteness! The Black Panther actor, 32, walked the red carpet at Dolby Theater in Los Angeles with his No. 1 woman right by his side ahead of the 91st annual Academy Awards on February 24. Donna looked stunning in a strapless black dress with jeweled, sheer designs. Meanwhile, her son looked handsome in a velvet blue tux with a black bowtie.

Michael posted a candid photo of the two on Instagram before they headed to the Oscars together. “My mama about to make me have to fight somebody she looking so pretty,” he captioned the mother-son snap, along with the hashtags, “#Oscars2019”, “#PopsIGotYou”, and “#DateNight.”. Donna was all smiles in the photo and so was the actor. He looked away from the camera and nuzzled his head on hers for the special moment.

The Creed star even put his mother on his Instagram Story as they were in the car on their way to the red carpet. He showed off her look, which featured a fierce, blonde buzzed haircut. “You know what it is,” Michael said in the video as he panned the camera to show his mother. “Oscars 2019,” he added. Michael’s record-breaking box office hit of a film, Black Panther is nominated for Best Picture at the 2019 Oscars. The film was also recognized in the following categories: sound editing, sound mixing, costume design, production design and original score. 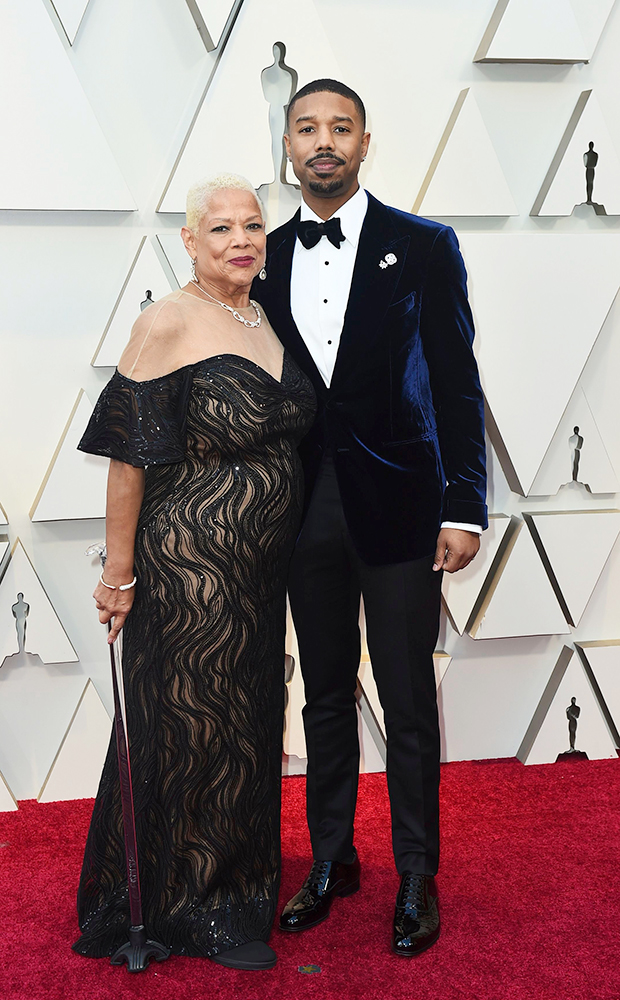 Michael B. Jordan poses with his mother Donna Jordan on the red carpet at the 91st annual Academy Awards at Dolby Theater in Los Angeles on February 24, 2019. (Photo credit: Jordan Strauss/Invision/AP/Shutterstock)

Michael asked Donna to be his date to the awards show during Oprah’s SuperSoul Conversations from Times Square earlier this month. Ahead of the Oscars Oprah asked Michael who he would be bringing as his date. “I don’t know yet,” he replied. “I think like this is the perfect moment. Mom, you wanna go with me? I haven’t even talked about it … Mom you wanna go?”, he asked. “Done. There it is.”

Mom’s were a big trend at the Oscars. Bradley Cooper brought along his mother, Gloria, although he was with his girlfriend, model Irina Shayk. The trio walked the red carpet hand-in-hand, which made for an adorable photo op. Charlize Theron and Regina King both made the Oscars a mother-daughter bonding night.