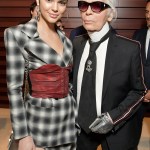 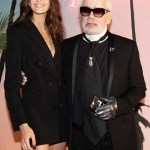 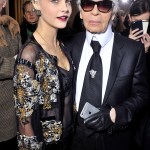 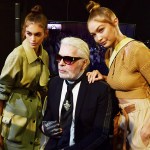 Legendary fashion designer, Karl Lagerfeld, has died, according to news confirmed on Feb. 19. He was 85 years old.

UPDATE: Chanel released the following statement after Karl Lagerfeld’s death: “An extraordinary creative individual, Karl Lagerfeld reinvented the brand’s codes created by Gabrielle Chanel: the CHANEL jacket and suit, the little black dress, the precious tweeds, the two-tone shoes, the quilted handbags, the pearls and costume jewelry. Regarding Gabrielle Chanel, he said, ‘My job is not to do what she did, but what she would have done. The good thing about Chanel is it is an idea you can adapt to many things. A prolific creative mind with endless imagination, Karl Lagerfeld explored many artistic horizons, including photography and short films. The House of CHANEL benefited from his talent for all the branding campaigns related to Fashion since 1987. Finally, one cannot refer to Karl Lagerfeld without mentioning his innate sense of repartee and self-mockery.”

Karl Lagerfeld is dead at the age of 85. Multiple French media outlets first reported the news on Feb. 19, and it was eventually confirmed by Fendi. The designer, who is best known for his work as the Creative Director for Chanel, had been working hard up until the time of his death. At the moment, there are no specific details regarding this tragic news, and a cause of death has yet to be revealed.

Less than one month before his death, Karl missed the Chanel spring 2019 haute couture show in Paris, which was an extremely rare occurrence for him. Afterward, his team confirmed that he had been unable to attend because he was “feeling tired.” The brand’s director of the creative studio of the house, Virginie Viard, represented Karl at the event instead. However, just last December, Karl traveled to New York to attend another Chanel show. The Paris show in January was the first time he missed out on representing himself, and there was no indication that Karl was ill before the time of his death. Chanel appointed Virginie to continue Karl’s work.

Karl got his start in the fashion industry as Pierre Balmain’s assistant. After three years, he moved onto work for Jean Patou, where he began designing haute couture collections for the brand. At this time, his collections were not well-received, and Karl took a two-year break from the industry. He returned in 1963 as a designer for Tiziani, where he worked for the next six years. He also freelanced for Chloe during this time, and began designing full collections for the brand in 1970, while also doing work for Fendi.

Eventually, Karl gained international fame, and became the Creative Director of Chanel in 1983, where he worked until the time of his death. Karl has worked closely with celebrities like Kristen Stewart, Miley Cyrus, Kendall Jenner Cara Delevingne and more. He also had a fashion label under his own name, Karl Lagerfeld, and worked as a photographer.

“I hate leisure,” Karl once told our sister site Women’s Wear Daily. “Except reading. I’m really a person made to work, if sketching is considered work. I’m pretty lucky to be doing what I’m doing in beyond-perfect conditions.”