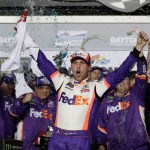 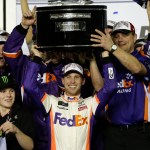 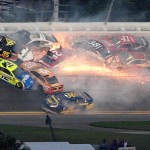 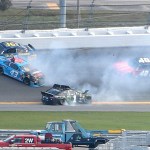 Denny Hamlin has officially won the 2019 Daytona 500! Find out about the stock car racing driver here!

After a crash-filled Daytona 500 this year (there were three major crashes in the last 10 laps alone), a victor has emerged from the wreckage. Denny Hamlin managed to win the big race in overtime. Here’s everything you need to know about him.

2. This year, Denny won the checkered flag for Joe Gibbs Racing, just a month after after Joe Gibbs’ oldest son J.D. passed away at 49 after a battle with a neurological disease. After climbing out of his car post-victory, Denny said, “This one’s for J.D. We’re desperately going to miss him the rest of our lives.”

3. Denny hilariously joked about why he’s unpopular among NASCAR fans on Dale Earnhardt Jr.’s podcast. “I always look at videos they have of me or pictures that are taken, and I look like I’m pissed off all the time,” Denny admitted on the Dale Jr. Download. “And I’m like, ‘Yeah, I probably wouldn’t approach him either.’”

5. He has wracked up so many wins in his accomplished career. In his 13 seasons, he’s amassed 32 Cup wins, including two Daytona 500 races and two Southern 500 races (2010, 2017). We’ll keep you posted with all of the latest news in the world of NASCAR. In the meantime, check out all of the photos from Denny’s recent Daytona 500 win in our gallery above.