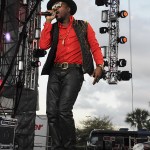 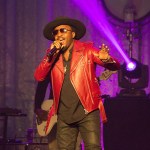 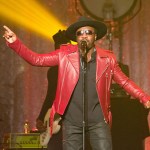 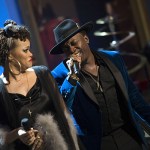 Before the NBA’s best will light up the court in Charlotte, North Carolina, hometown hero Anthony Hamilton will serenade fans with the national anthem. Get all the details on this R&B star.

The Spectrum Center will get soulful ahead of the NBA All-Star Game on Feb. 17. Before LeBron James, Steph Curry, Kyrie Irving, Giannis Antetokounmpo and the rest of the NBA All-Stars go head-to-head, they’ll stand for what will be a powerful rendition of the “Star-Spangled Banner.” Charlotte-native Anthony Hamilton, 48, has been tasked with performing the national anthem before tipoff, bringing some hometown pride to the North Carolina celebration. Before he takes the mic to make the NBA swoon, let’s get some details on this 17x Grammy-nominated singer.

1. His sophomore album went Platinum. Anthony Cornelius Hamilton was born in Charlotte. His mother, according to according to a 2006 article with Charlotte Magazine, struggled to raise him, his brother and his sister, since his father wasn’t around much. After his maternal grandmother got him his first singing gig in the church choir, a life-long love of music began. After working to get heard, he signed with Uptown Records in 1994, but the label folded before his first album could be released.

After performing at an artist showcase in 2003, he was signed to So So Def Records, and his first album on the label, Comin’ From Where I’m From, was released in 2003. It has sold more than 1.2 million copies and reached No. 6 on the US R&B charts while peaking at No. 33 on the Billboard 200. Since then, he’s amassed 17 Grammy nominations, winning Best Traditional R&B Performance in 2009.

2. He used to be a barber. Prior to his success as a singer, Anthony Hamilton cut hair,. He had a chair at Magnum’s, a barbershop on West Boulevard. “He’s the same cat from fifteen, twenty years ago—same spirit. That’s why people love him,” Darrick “Chop” Staton told Charlotte Magazine about the man he went to barber school with. “He’s a people person, and he’s very humble.”

3. He’s sung for the Obamas. In addition to being an inductee to the North Carolina Music Hall of Fame, he’s also had the pleasure of singing for President Barack Obama and First Lady Michelle Obama in 2016.

4. He’s going to keep it humble at the All-Star Game. “I know I’m not boo-proof,” he told The Undefeated. “The safest thing to do is to not do too much. People like the national anthem more standard, but you can also make it your own with different inflections and vocal textures.” So, don’t expect him to go viral like Fergie did last year.

5. He and his background singer made beautiful music together. In 2005, Anthony married his background singer, Tarsha McMillan, after two years of dating. Sadly, the song had to come to an end: they announced in 2015. Though, it’s not like he doesn’t have a lot of love in his life, as he’s a father of six boys who range in age from 6 to 30.