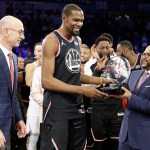 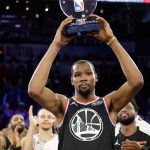 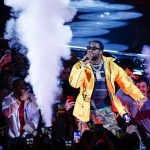 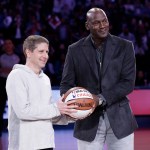 Can Meek Mill open up EVERY NBA All-Star game? Philadelphia’s favorite son played the 2019 basketball event with a medley of hits that was totally lit — literally!

Charlotte, North Carolina is over 500 miles from Philadelphia, Pennsylvania, but Philly native Meek Mill, 31, got a hero’s welcome at the Spectrum Center when he kicked off the 2019 NBA All-Star Game on Feb. 17. The rapper got the night underway in an epic way, as he delighted the crowd with a collection of his sickest hits. He started off with the intro to his Champions album, which seemed so appropriate. “We finally made it out them trenches n–, hallelujah,” he rapped, before kicking it into “Going Bad.” From there, the opening got lit – literally. As flames of fire blasted up into the air, a bevy of ballin’ backup dancers busted out some slick moves.

From there, Meek kicked into a few verses of “Uptown Vibes,” and everyone was feeling it – especially when the NBA All-Stars appeared on stage behind Meek. After the rapper gave some love to the crowd in Charlotte, he took a bow, stepping aside for the introduction of Team Giannis. Yet, that wasn’t the last of Meek, as he came in to spit a few verses of “Dreams and Nightmares” to herald in the arrival of Team LeBron.

For Meek, the love he has for the NBA is mutual, as the league and its stars celebrated the rapper’s release from prison in April 2018. After spending nearly six months behind bars on a parole violation – one that many thought was, at best, “question” and at worst, an example of America’s broken prison system that often oppresses people of color, long after they paid their debts to society – Meek was granted his release by the Pennsylvanian Supreme Court. After grabbing a haircut, Meek boarded a helicopter to the Philadelphia 76ers game with the Miami Heat. Meek, wearing a Joel Embiid jersey, rang the replica Liberty Bell before tipoff, per USA Today.

.@MeekMill went in on Dreams and Nightmares 🔥#NBAAllStar pic.twitter.com/84FJbt01Gx

“From a basketball perspective, Meek is the heart and soul,” Philly 76ers owner Michael Rubin said in May 2018, according to the Washington Post, which also says the billionaire owner is “close friends” with Meek. “ He’s a big part of the team…He’s part of the culture of this team. These guys love him.” It’s true. Meek shot the video for “House Party” at former Sixers guard Lou William’s estate. He was seen courtside with then-girlfriend Nicki Minaj in 2016. In 2017, he campaigned for Joel Embiid to be voted into the All-Star game. Even when the team was a wreck, Meek’s loyalty never wavered.

“Everything he did for the Sixers during the dark time, it was like really the perfect story,” Rahim Thompson, founder of the Chosen League, a well-known Philly summer league, said of Meek’s release in time for him to see the Sixers beat the Heat. “It was like a fairy tale. It was like a hood fairy tale. Like, that’s a legendary story that will always be in the history of Philadelphia sports.” Now, with that incredible opening to the All-Star Game, Meek has etched a spot in the NBA’s history.