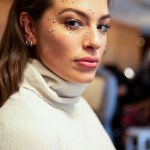 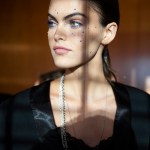 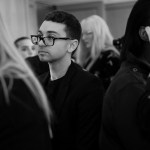 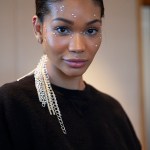 It’s a wrap on another New York Fashion Week and HollywoodLife was backstage at some of the biggest and best shows of the season, watching as Bella Hadid, Ashley Graham & more got ready for the runway.

Being backstage during New York Fashion Week is electric and exciting. Seeing all the behind-the-scenes moments before the models hit the runway is an exclusive privilege! It’s fast-paced, with usually around 40 models getting glam with the help of stylists, plus media, and the designers themselves floating around. We saw models like Ashley Graham, Bella Hadid, Chanel Iman and many more getting their hair and makeup done before the shows. Click through the gallery to see the in-process and finished beauty looks!

At Christian Siriano’s Fall 2019 Show, hair was done by one of our favorite stylists, Justine Marjan. She created sleek ponytails with silver chains. Her top tip? “Apply TRESemmé TRES Two Unscented Extra Hold Hair Spray to keep hair and chains in place. The chains provide a lot of movement, so keeping it controlled is key!” She used the ghd platinum+ styler for a frizz-free look, before attaching 10 chains into each model’s hair. Makeup was by Maybelline, and models rocked tiny crystals on their faces.

At Oscar de la Renta, lead hairstylist Odile Gilbert wanted every model to look like themselves. Some models rocked frizzy, brushed-out curls, while others, like Bella Hadid, rocked ponytails with velvet bows. The theme was the “girl on the go,” so many styles were created using TRESemmé products to suit each girl’s individual look. The nail look was an opulent red — Zoya‘s Alyssa. Lead manicurist Miss Pop told us, “The collection was filled with darker tones including deep reds, emerald greens, and navy. From billowing gowns to statement accessories that suggested opulence, the nail look Alyssa matched well with not only the line but with the lip. Spencer [a camel color] offered the perfect neutral for all skin tones for the toes.”