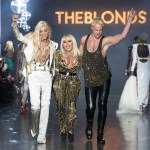 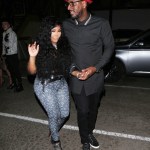 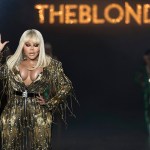 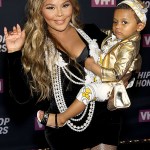 New York Fashion Week is well underway, and on Feb. 12, it was more than just models heating up the runway. Check out Lil Kim showing major skin during a performance at one NYFW event here!

Lil Kim hit the runway for a performance during The Blonds show at New York Fashion Week on Feb. 12, and she definitely had people talking with her eye-popping ensemble! The 44-year-old rapper rocked a black jumpsuit with gold fringe, which featured a majorly plunging neckline. She went braless in the look, putting major cleavage on full display. Kim completed the ensemble with sky high black heels and a blonde wig, and she was strutting her stuff back and forth with ease!

The Blonds show was a star-studded affair, with Paris Hilton hitting the runway to model. Kim interacted with the models as she strutted past them onstage, and looked totally comfortable and confident the entire time. At the end of the show, she posed with The Blonds creators on the runway, too. Kim hung out with Paris and other models backstage after the show, and she fit right in! Meanwhile, stars like Iskra Lawrence and Lydia Hearst were spotted sitting in the front row at the fashion show.

Lil Kim has never been shy about showing skin on the red carpet or at public events, so it’s no surprise to see her out and about in this cleavage-baring look. Obviously, she looks beyond incredible, so we don’t blame her for wanting to flaunt it!

Earlier this year, Lil Kim hinted that she would have an album coming out at some point in 2019 — possibly even as early as March! Her last record was released in 2005, so this has most certainly been a long time coming!