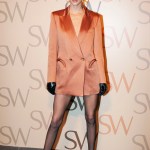 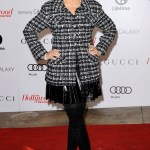 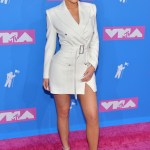 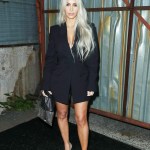 Kendall Jenner stunned in an orange blazer dress at NYFW! See how her look compared to other Kardashians who’ve donned their own take on the trend!

Kendall paid no mind to the snow falling around her outside as she made her way toward the party, clad in black see-through tights, orange heels, black gloves, and a Louis Vuitton bag. She kept her fingers warm, though, with black leather gloves! She finished her look with large gold earrings that matched the hardware on her blazer dress.

While Kendall has paved her own path for a modeling career, it doesn’t mean she hasn’t looked up to her sisters and mother, fashion-wise! Kendall’s blazer dress look reminded us of her sisters’ and mom’s dresses in the past – Kris, 63, Kim, 38, Kylie, 21, have all worn the trend themselves, as well!

Kim rocked the blazer dress look herself on multiple occasions, and we love this black double-breasted one she wore while out with Kanye in 2014! Kim kept it simple without any tights underneath, and matched her beige heels with the gold hardware on her dress. The blazer wrapped around her and revealed her cleavage and tanned skin. Kylie herself rocked the look at the 2018 MTV Video Music Awards in a white version of the trend, with a belt to emphasize her waist even further! She paired the lighter dress with platinum-blonde hair, white nails, and silver heels.

We’ll have to crown Kendall as the winner of this fashion battle – we loved that she made the chic look even more high-fashion by selecting a colorful version of the trend! Also, we think that by adding sheer tights and some earrings, Kendall made the look less plain – but we love this trend on the whole KarJenner family, regardless! Be sure to check out the gallery above for more of this blazer dress look from Kendall, Kim, Kylie, and Kris!