It’s no ‘Japanese BBQ finger,’ but it’s up there. Pete Davidson continues to cover up his Ariana Grande-related tattoos. Wait — did he just throw some shade at his ex by suggesting she ‘cursed’ him?

It pays to be in the “celebrity tattoo cover-up” business, especially if Pete Davidson, 25, or Ariana Grande, 25, has your shop’s number handy. During their short-lived romance, Pete got plenty of Ariana-inspired tattoos, like the words “mille tendresse” (French for “a thousand tendernesses,” according to Buzzfeed) on the back of the neck. It’s an exact copy of the tattoo Ariana has on the back of her neck, and the latest ink to get covered up in the aftermath of their split. Pete, according to tattoo artist Jon Mesa, had the word “CURSED” etched over the French phrase.

“How many licks does it take to get to the center of a tootsie roll pop?” the caption read, indicating the brand new tattoo of the Tootsie-Roll Pop owl on Pete’s back. It seems this cover-up comes with a little bit of shade. Does Pete mean he’s “cursed” at love with his failed relationships? Is he accusing Ariana of “cursing” him? Also, is that a smoking Muppet on Pete’s back? So many questions over a relatively simple design.

So, how many tattoos are left to be covered up? Pete had a bunny-eared bondage mask (similar to the one Ariana wore on the cover of her Dangerous Woman album cover) tattooed behind his left ear, but he turned it into a giant black heart (with a smaller lowercase “a” to it) in October. He also had the letters “AG” inked on his fingers. Speaking of his fingers, Pete and Ariana had matching tiny clouds etched onto their fingers. They also celebrate their engagement by having “reborn” inked onto their thumbs. They also both go “H2GKMO” (“Honest 2 God, Knock Me Out,” one of Ariana’s favorite saying, according to PEOPLE) on their right thumbs.

How many licks does it take to get to the center of a tootsie roll pop? Fun tats for the homie #petedavidson. Follow me to be eligible to win a free tattoo! 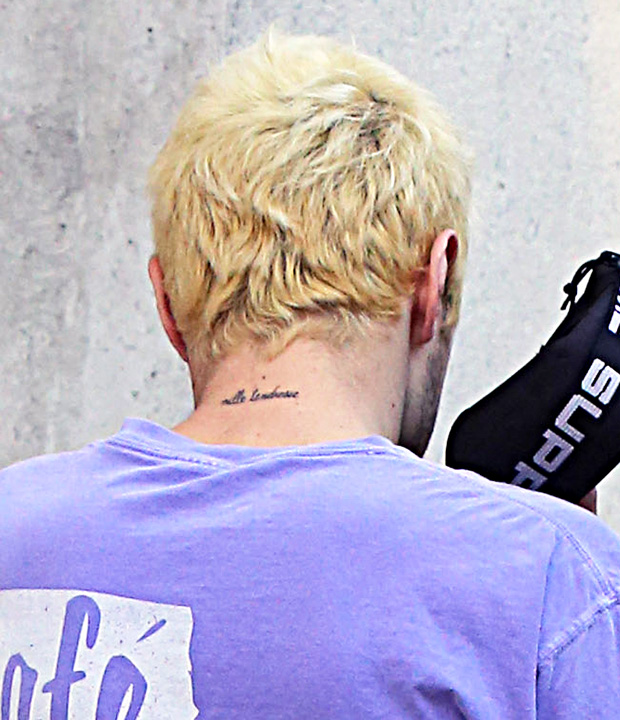 Here’s hoping Pete holds off on getting any Kate Beckinsale tattoos. Imagine if he gets Kate from the first Underworld poster on his body (and how painful it’ll be to cover it up) on his body? Yikes. Though, if he tries to spell her name out in kanji, he better triple-check it before ink hits skin. Ariana tried to get “7 Rings” tattooed on her hand, but ended up getting “small barbecue grill” inked permanently on her hand. Her attempt to fix it made it worse, as the tattoo reads “Japanese BBQ Finger.” It seems Pete’s not the only one “cursed” when it comes to tattoos.