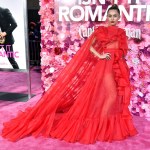 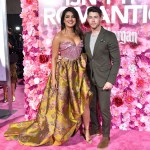 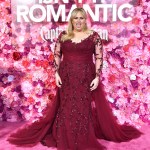 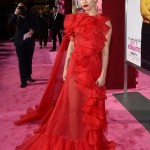 Nick Jonas and Priyanka Chopra have made their way from the altar to the ‘pink’ carpet, beaming with love in their designer fits! See the precious photos here.

Ah, it is romantic. Nick Jonas, 26, and Priyanka Chopra, 36, were the image of marital bliss at the Isn’t It Romantic film premiere on Feb. 11! The couple, who have been married for two months now, wrapped their arms around one another and sweetly smiled for pictures on Pri’s big night at the Ace Hotel in Los Angeles. She plays a leading role in the new Valentine’s Day flick! For one of the shots, her and Nick even turned towards one another, and Priyanka beamed brightly while Nick served googly eyes at his wife. See the photos below! Priyanka wore a Vivienne Westwood gown with a metallic pink bodice and a trailing gold skirt with a floral print.

It’s easy to see why Nick and Priyanka are still sporting that newlywed glow — their wedding basically hasn’t stopped since they exchanged vows at India’s Umaid Bhawan Palace on Dec. 1, 2018! Their seemingly infinite number of wedding receptions in the weeks since have spurred many memes, and even Nick got in on the joke. Under a photo of him and Pri snapped at the Learning Lab Ventures Gala in Beverly Hills, the “Jealous” singer wrote on Feb. 1, “Walking into wedding reception 100047 like… Haha just kidding.” No JK needed, Nick. Priyanka also couldn’t help but muse about the never ending party that her and Nick’s marriage is. “My life has been a rom-com in the last six to seven months,” she joked in a cast interview to ET Canada. How fitting that she’s starring in this year’s most anticipated (satire) rom-com, starring Rebel Wilson!

Priyanka’s gown on the “pink carpet” competed for attention with Miley Cyrus’s on Monday night! Her husband Liam Hemsworth is starring alongside Priyanka in Isn’t It Romantic, but couldn’t make the premiere after being hospitalized the day prior. Luckily, Miley’s lavish gown distracted from his absence, as a trail of red Valentino ruffles followed behind her.

Check out even more photos from the Isn’t It Romantic film premiere in HollywoodLife’s gallery above! Crazy Rich Asians star Constance Wu also attended the event in a gown you must see.