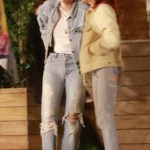 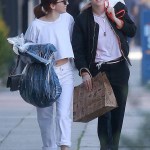 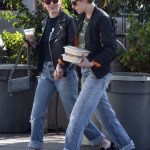 The couple that dresses together, stays together…right? Kristen Stewart and her girlfriend, Sara Dinkin, were totally twinning in matching ripped jeans while out in Malibu Feb. 11.

Kristen Stewart and her girlfriend, Sara Dinkin, stepped out for a date night in Malibu on Feb. 11, and whether they meant to or not, they coordinated their outfits for the outing! Both ladies wore light-wash, ripped jeans to the restaurant, keeping it casual for their romantic evening. Kristen paired her denim pants with a matching jacket and n:PHILANTHROPY white t-shirt, and added a baseball cap to cover her cropped blonde hair. Sara opted for a fluffy, off-white jacket on her top half, and both women rocked black sneakers to complete their looks.

It’s been just about two months since Kristen and Sara were first spotted together, and they’ve been pretty inseparable ever since sparking romance rumors in the middle of December. Their first public outing as a couple came amidst rumors that Kristen had ended things with Stella Maxwell after nearly two years of dating, but the women never discussed the breakup or when it happened.

Of course, Kristen is no stranger to dating in the public eye. She was in a long-term relationship with Robert Pattinson for several years while they filmed the Twilight franchise. Their romance blew up publicly, too, when she was photographed cheating on him with Rupert Sanders in 2012. The two stuck it out through the final Twilight premiere, but eventually ended things in the spring of 2013. Since then, Kristen has been in very public relationships with St. Vincent, Soko and Alicia Cargile.

As for Sara — she’s a stylist who has worked with celebrities like Jessica Szohr, Chloe Bennet and many more, according to her website bio. She also runs a blog called Fancy Hipster and wrote a short film that premiered in 2015. It’s unclear how Sara and Kristen met or first got together romantically.