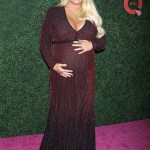 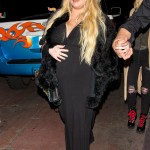 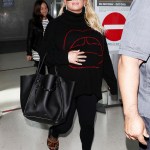 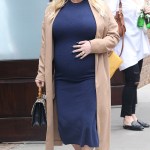 We love that Jessica Simpson can make light of a funny pregnant situation! See her pic inside in which she tries to squeeze through two cars!

“With You” singer Jessica Simpson, 38, showed that she knows how to take a joke! The mom shared a hilarious picture on Instagram on Feb. 9 of her trying to fit between two cars in a small space while pregnant, carrying her child! It’s a good thing she had a sense of humor about it!

“Tight squeeze but I’m pushin’ through,” she captioned her photo. Jessica wore a black maxi dress and cardigan, looking actually comfortable as she tried to squeeze between the two cars. She held up a peace sign with one hand and her phone in the other, and rocked Fendi slides as she posed. Jessica wore a hair scarf on the top of her head, and wore pink nail polish and a cute, dark makeup look.

Actress January Jones, 41, commented on Jessica’s pic. “At least the feet fit in the Fendi,” she said! Very true – the Fendi shoes are definitely the silver lining! This is Jessica’s third child on the way – she has two kids with former football player Eric Johnson, 39, already: Maxwell Drew, 6, and Ace Knute, 5.

Tight squeeze but I’m pushin’ through

Jessica had her baby shower on Jan. 19, and it was a beautiful event! At the shower, Jessica revealed that her daughter will be named Birdie! How adorable? “Jess is feeling excited to meet this little girl,” a source told Us Weekly. “This has been her toughest pregnancy, so she is ready.”

By “tough pregnancy,” the source could’ve been referring to the fact that Jessica has been dealing with swollen feet during her pregnancy! But fortunately, her feet fit in her sandals, and that’s not something she was concerned about squeezing through – just the cars! We hope Jessica has been comfortable as she has navigated her third pregnancy – at this point, it looks like she could pop at any second! We can’t wait to see what Birdie looks like, and we hope she has her mom’s sense of humor!