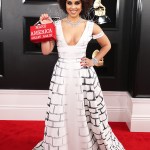 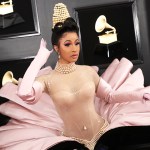 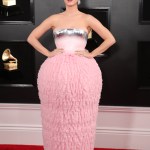 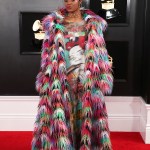 There were some strange outfit choices at the 2019 Grammy Awards – and more than one that referenced Donald Trump? See some of the wackiest red carpet looks from the show!

Welp. Joy Villa did it again. The 27-year-old singer arrived to the 2019 Grammy Awards wearing an outfit that let everyone know she loves Donald Trump. This time around, she showed up on the red carpet in a white dress with a brick pattern drawn on it. Then, across her butt in bright red were the words “Build the wall.” The top of her dress was also adorned in barbed wire, because why not? To really drive home the idea that she’s a Trump supporter, she carried a red purse that said, “Make America Great Again.”

But unlike in previous years, Joy wasn’t the only celebrity to show their support for the president with their Grammys attire. Ricky Rebel stepped onto the carpet in white pants, boots and a shirt under a blue jacket that said everything from “Keep America Great” to “Trump 2020.” Can we go back to the days where the weirdest thing on the Grammys red carpet was Lady Gaga in an egg? At least that had quality meme potential.

But not every odd outfit was pro-Trump. Some just had a ton of feathers on them like the colorful coat Tierra Whack wore. Head up to the gallery above to see even more of the wackiest dressed celebrities at the 2019 Grammy Awards!