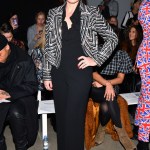 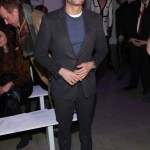 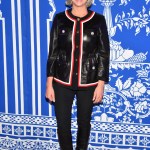 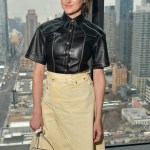 Tiffany Trump was all smiles with her boyfriend, Michael Boulos, on the morning of Feb. 9, when she showed up looking incredible in a mini dress at the Taoray Wang show during New York Fashion Week.

Tiffany Trump, 25, brought out her hunky billionaire boyfriend, Michael Boulos for a morning date during New York Fashion Week! The good-looking couple showed up to the Taoray Wang fashion show on Feb. 9, and they were definitely an attractive sight to see! Tiffany wore an incredible dark purple, black and green velvet off-the-shoulder mini dress with a thick black belt that showed off her waist. Michael looked classically handsome in a black blazer over a v-neck white t-shirt and matching black pants.

In addition to Michael, Tiffany’s mom, Marla Maples, 55, and brother Donald Trump Jr.‘s girlfriend, Kimberly Guilfoyle, 49, also attended the show and hung out with the blonde beauty. Marla looked stunning in an off-white suit that consisted of a sleeveless top, a blazer, which she draped over her shoulders, and curve-hugging pants that flared out at the bottom. Kimberly was equally as attractive in a bright red blazer style wrap around dress. At one point, Tiffany, Marla and Kimberly posed for pics together, and Michael joined Tiffany and Marla for a pic as well. Tiffany, Michael and Marla sat in the front row during the show and seemed to enjoy watching the close-up view of the models taking the runway.

Tiffany’s appearance at the fashion show comes after she made headlines for wearing the same color wardrobe of many Democratic women taking a stand against her dad President Donald Trump during his second State of the Union address on Feb. 5. Tiffany showed up to the annual live event wearing a white Roland Mouret blouse and skirt, but her outfit choice didn’t seem to in any way hinder her support for Donald, as she proudly watched him during his speech.

Tiffany and Michael made their relationship official when they showed up to the White House together last month, so it’s no surprise that he’s been publicly seen with her more and more lately. We wish them both happiness!