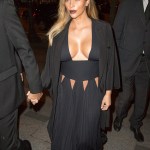 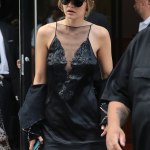 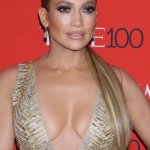 Julianne Hough showed off her new shaggy hair makeover in a glamorous pink mini dress at Spotify’s pre-Grammys party. She revealed how her red carpet dress was a pick-me-up after having a ‘down low’ phase.

Getting in the spirit of Valentine’s Day early! Julianne Hough, 30, wore a hot pink mini dress, topped off by a red bow, to Spotify’s pre-Grammys party for the “Best New Artist” nominees at Los Angeles’ Hammer Museum on Feb. 7. Julianne wore the bright piece, designed by Silvia Tcherassi, for a specific reason. “It’s a new year. I’ve kind of been in development for the last year, so I’ve kind of been on a down low,” Julianne said during the party’s red carpet portion, which HollywoodLife attended. “So it was sort of like, “Hello, it’s February. It’s red and it’s pink, and I’m full of color and life right now, and I just want to express that.”

As for now, Julianne declared she’s in a “frickin’ amazing place,” and even has new music coming our way! Another notable change was right on the singer’s head — she’s rocking a new shaggy ‘do and shadow root. She debuted the hair makeover to her Instagram right before hitting the party, after previously rocking a blunt bob. We’re loving the experimentation!

Julianne even opened up about her married life with ice hockey player Brooks Laich, 35, whom she married in July 2017. As for the “best part” about marriage, she said it’s that “you go through your ups and downs, but you always know that the ugly parts of you are your best parts.” Just last month, the country singer and dancer got candid about her sex life with her husband. Julianne suffers a condition called endometriosis, which can make sex painful because of tissue growing outside the uterus, instead of lining the womb as per usual.

From the bright colors to her wispy hair pieces, Julianne is giving us serious rock ‘n’ roll vibes. Check out even more stars rocking similar looks in our gallery above!