Hayden Panettiere, 29, just shut down claims that she’s an absentee mother with one photo. Despite not speaking directly about a new report — which claims Hayden “hasn’t had much time with her daughter,” Kaya, 4, who she shares with ex, Wladimir Klitschko, 42 — the actress showed the world that she is a hands-on mom, posting a photo to Twitter with her daughter on February 7. “Sweet moments with sleeping babes,” Hayden captioned the sweet snap, which showed Kaya holding her mother’s arm.

The mother-daughter pic came just one day after a controversial report about Kaya’s living situation. The report claimed that Hayden’s daughter lives in Ukraine with Klitschko and her grandmother, where they’re from, while Hayden lives in the states with her boyfriend, Brian Hickerson. “[Hayden] knows the child being with her is not the best for [Kaya right now],” a source told Us Weekly. “It’s a sad situation.”

However, soon after the report hit the news cycle, Hayden’s boyfriend slammed the claims. ‘Hayden is actually on a family vacation right now with her daughter and the Champ, so don’t believe everything you read,” Hickerson told Access Online on February 6. “She’s a great mom.” 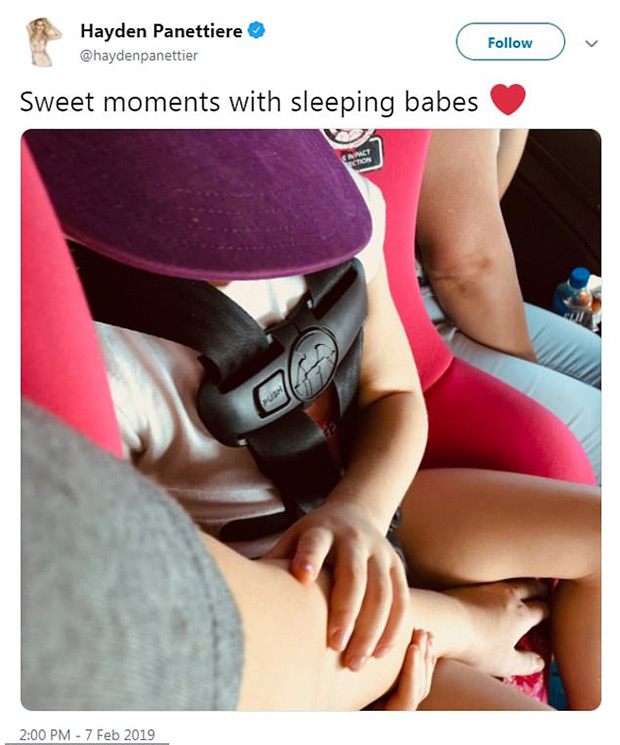 The report went on to claim that Klitschko raises Kaya, with the help of his mother. The report by Us came at an interesting time, seeing as Hayden told the outlet that coparenting with Klitschko had been “going well,” in an interview posted one week prior, on February 1, adding that she and her ex “get along really well.”

And, this wasn’t the first time Hickerson denied rumors about Hayden in the press. He jumped to her defense last year, when a report claimed that those close to the actress were concerned about her relationship with him.

“Just to be clear, Hayden’s friends and family are not worried about her at all,” he told Access at the time. “Hayden is happy and healthy, and so is our relationship.”

Hayden and Hickerson were first linked in August when they were spotted out to dinner together in Los Angeles. Their outing wasn’t not too long after reports swirled that the actress and her pro boxer ex had split.