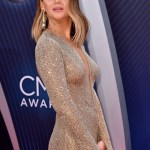 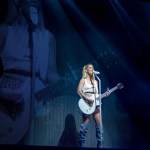 As Maren Morris prepares to attend this weekend’s Grammys, where she is up for 5 awards, she also brings to the surface an important discussion about the inequality women in the world face, daily. In her new music video for her latest, empowering single “GIRL,” the visuals open up with a tight shot on Maren’s face as she answers a question from a faceless interviewer. “I think it comes down to that we don’t want more than anyone else, we just want the same as everyone else.” The chilling truth that Maren so simply articulates sets the scene for the rest of the Dave Meyers-directed video. “Having worked with Dave Meyers on “The Middle” music video, I love how diverse his resume is with his music videos and even his commercials. They always have a really distinct meaning in them,” the My Church singer EXCLUSIVELY revealed to HollywoodLife.com. “I just felt so lucky to get to work with him on this song because I knew he’d bring it to life. Luckily we’ve really had time to really fine-tune the treatment and make it accessible for not just right now, but years to come. We didn’t want to timestamp it with a really specific historical thing.”

The video follows a variety of women from all different walks of life, facing the patriarchy, trying to make a living, trying to wax their own armpits… trying to live up to societies unrealistic standards of being a girl. The beauty of the “GIRL” music video is that most of these women remain anonymous, with only the back of their heads facing the camera. It’s a powerful move by Meyers that allows anyone watching to put themselves in the character’s shoes and see the distress, pain and inequality from their point of view. Even more, we get a glimpse at Maren, herself, being pushed and ridiculed by a male music exec who is critiquing her vocals. In the end, the tight shot is back on Maren, who says, “One of the hard things about being a girl is having to always answer questions about why it’s hard being a girl.” Mic drop.

Lucky for us, we don’t have to wait too long for more Maren music! The Grammy Award winner announced that her new album, GIRL, will be available March 8th. Oh, and that’s not all. Maren will be hitting the road on an ALL-FEMALE world tour, obviously titled Girl: The World Tour. Her friends Cassadee Pope and RaeLynn will be joining her on select date, which you can find here!