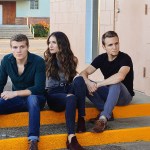 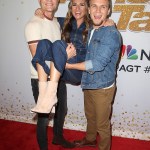 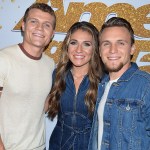 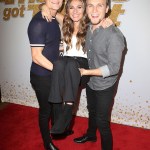 ‘AGT’ semi-finalists We Three are hitting the road! Before they embark on their tour, the trio EXCLUSIVELY told HollywoodLife why the stint will be so special for them, & how a loss on the competition show actually propelled them forward.

Pop rock sibling-trio and America’s Got Talent semi-finalists, We Three are hitting the road! The group, comprised of Joshua, Bethany, and Manny Humlie, just announced their debut-headlining tour, and fans can’t wait to see the band take their first full trek across the country. After the release of their debut self-titled record, they will be kicking off their 34-date tour in March. Before they embark on the nationwide stint, HL EXCLUSIVELY caught up with all three musicians to get the scoop on what to expect, and the touching story of how they penned “Heaven’s Not Too Far,” the ballad that left fans tearing up.

Growing up, was music always in your life?

Bethany: It was, yeah, we were surrounded by music. Our dad was in a family band with his siblings, my mom played guitar, the same as Joshua. It was just kind of everywhere.

Looking back now at your time on AGT, is there a standout moment that stuck with you guys?

Joshua: I would have to agree.

Bethany: I think that song, because when you’re on a show like that, you know, sometimes you feel like is it just one song that works. And then, it does it from that point but I think after we played Lifeline and we got the feedback that we did, and even beyond the feedback, we realized, these songs are connecting with people. It’s kind of crazy.

Do you feel like not winning the show actually added more fuel to your fire?

Bethany: I think we like to say when we got off the show, the moment we finished, I remember literally walking down that hall we just walked left and you go off the stage. I remember we just felt like there was a weight off of us and it was now time for us to start our career.

Fans really seem to connect to “Heaven’s Not Too Far.” Can you tell me a little bit about making the track, and the message behind it?

Manny: Yeah, I think after our mom passed, a lot of people were expecting us to write songs and you know, they were specifically asking-I’m sure you’re writing so many songs right now. And the truth is, for a long time, at least I wasn’t writing very many songs. I guess none of them felt good enough for some reason and then I sat down at the piano and I sang the first lyrics of the song, she called us all honey, and so I sang, ‘Honey I Thought You Should Know’, there was no intention to write this song at the moment. But then, that thought popped into my brain of writing from her perspective and the song came out in like an hour.

Bethany: Because a lot of people don’t know how to express themselves when they go through things like that and people reached out saying this song, you know, ‘I haven’t cried for ten years but this song allowed me to cry,’ which you know, however you deal is how you deal, but a lot of people needed that song, which is insane. But we did too, to be able to get through stuff.

What vibe were you going for with your new album overall?

Joshua: I think the core we always say our music, it’s a promise that we always make to our fans is that we will, we want to be honest, because if it’s not honest it’s not worth putting out there and people can see through it as far as lyrics go. And so I think that’s a huge part of our record is if you go listen to it and you come see us play it live, there’s so much honesty in it. And we’re hopefully just writing about things that are just real and that everybody goes through and so when you come to our shows, we’ll all scream them out together.

Bethany: And we definitely like a lot of high energy music that we listen to and stuff so a lot of our record definitely has like a pop feel throughout it and stuff but you know, we’re a live band as well, so it’s kind of cool to mix that together and in the record, you know, we’re playing all this stuff.

Who out of the three of you would you say is the silliest member of the group?

Bethany: My silliness it like, doesn’t make any sense, and it’s weird. Josh’s comes out of nowhere, he’ll do something like, and it’s like oh, you premeditating that prank on me for months.

Joshua: Planning it for years.

Bethany: I can’t get mad because it’s clever.

So there’s some shenanigans when you guys are on tour.

Congrats on your forthcoming tour! What’s next on your radar for 2019?

Bethany: The tour, we’re just so stoked about.

Bethany:  Yeah, it’s like a dream tour. We can’t even believe it.  It’s really, yeah, we looked, we we’re in L.A. on Monday, the dates were all set and stuff but we kind of laid out the map and just visualized the whole thing and it’s just better than we could’ve ever imagined. We’re just stoked and we’re gonna try to bring the best energy that we’ve got to all of these fans that we get to meet.

Find out what cities We Three will be hitting on their tour below, and head to the band’s site to grab tickets!