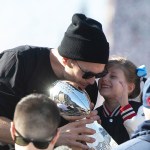 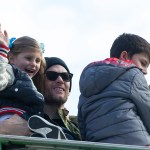 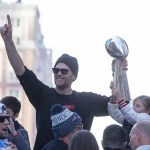 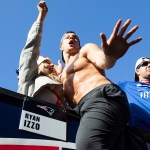 The Patriots are celebrating in the streets of Boston with their sixth Super Bowl parade! Check out all of the 2019 champions partying it up with fans right here!

After pulling off their sixth Super Bowl win, this time against the Los Angeles Rams, Tom Brady, Rob Gronkowski, SB53 MVP Julian Edelman and the rest of the New England Patriots are all set to do some real celebrating in the city that they call home: Boston. The parade, which started at 11 am EST, plotted its course through Bean Town, from the Hynes Convention Center all the way to City Hall. Fans lined the streets, all eager to see their conquering heroes ride through on duck boats. The win tied New England with the Pittsburgh Steelers for the most Super Bowl wins, and Boston celebrated as if they were indeed the best sports town in the world. In addition to checking out pics from the parade, you can also watch the main event with our live stream.

Meanwhile, while Gisele Bundchen is celebrating Tom’s today with the parade, she also gushed about his Super Bowl win by sharing a message to her husband with her followers. Taking to Instagram, Gisele wrote, “What a special night! Congratulations Patriots! Congratulations my love! Your tireless commitment, discipline and hard work never [ceases] to amaze me. We love you!” What’s even sweeter was the sweet pic she shared of the two of them enjoying a post-win smooch on the field. For Gisele, who started dating Brady in 2006, this will mark her third Super Bowl victory parade (the Pats won Super Bowls XLIX, LI and LII since she and Tom fell in love.) From how she cheered on Tom during the big game, it’s safe to say she hasn’t gotten sick of winning.

But she wasn’t the only celebrity who celebrated the Patriots’ decisive 13-3 win over the Rams. For instance, Captain American himself, Chris Evans, tweeted, “Congratulations Patriots!!!! And congrats to the Rams for playing a great game. You managed to take my blood pressure through the roof.” Meanwhile, Ellen DeGeneres shared her congratulations, writing, “Congratulations, @Patriots! And what an incredible season for the LA @RamsNFL. You made us proud. #SuperBowl.”

We’ll keep you posted with all of the latest news about the parade. In the meantime, check out all of the photos from the Patriots’ celebration in our gallery above!