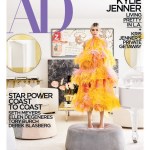 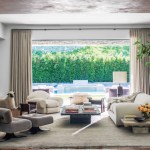 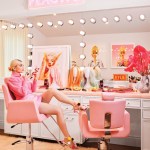 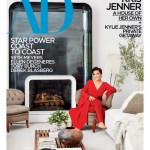 Curious what the mansion of America’s fifth richest celebrity looks like? Take a peek inside Kylie Jenner’s ritzy and über pink abode, here!

Kylie Jenner, 21, hopped from the cover of Forbes to Architectural Digest for yet another profile documenting her impressive wealth. The Kylie Cosmetics CEO gave the interior design magazine a full tour of her entire Hidden Hills mansion, from her art-adorned bar to her dining room outfitted with plush chairs in multiple shades of pink. It was a rare look at the almost-billionaire’s abode, as we normally only see the entryway filled with Andy Warhol prints on her Instagram Story! The homeowner popped into the pictures herself, as Kylie posed in a Marc Jacobs gown embellished with layers of pink and yellow plumage, and Christian Louboutins on her feet, for AD’s March 2019 cover — see it below!

Throughout each room, one theme remained consistent: the abundance of colorful screen prints, hailing from artists like Damien Hirst to Jean-Michel Basquiat! “I told Martyn I wanted a fresh, fun vibe to match the way I was feeling. Color was essential. I love pink, and I wanted a lot of it!” Kylie told AD, referring to her interior designer, Martyn Lawrence Bullard. You see, Kylie’s not only a makeup guru, but a budding art collector as well. “Kylie feels a deep connection to Marilyn Monroe, so we placed a series of Warhol screen prints of Marilyn along the main stairway. In general, we selected artworks that felt appropriate for a young collector with feminine tastes. Everything reflects Kylie’s personality,” Martyn told the magazine.

Kylie’s demand for color was most apparent where the magic happens: the “glam room.” The vanity was lined with a portrait of Marilyn, pastel wigs, big bubble lights and prints of vintage Barbies in the mirror’s reflection. Kylie hoisted herself in one of the bubblegum pink chairs wearing an even brighter pink co-ord: a Frame sweater and Staud skirt. Fendi pompoms danced up the straps of her heels. Get a closer look below!

Kylie’s neighbor and mother, Kris Jenner, was also treated to a mansion profile by AD! The 63-year-old momager’s home was much more muted in color, opting for a neutral palette, but had an equally impressive art (and handbag) collection. Pictured above is the Keeping Up with the Kardashian star’s living room, with an “Oscar Niemeyer chair and ottoman, a Lalanne sheep, and a cocktail table by Vincent Dubourg,” as AD described. Check out even more photos in HollywoodLife’s gallery above!