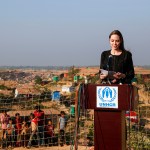 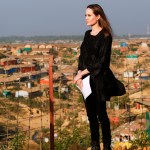 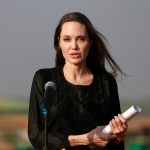 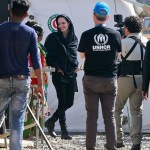 After taking care of those who mean the most to her, Angelina Jolie decided to do good for others. After leaving her kids at home, Angie traveled to Bangladesh to meet Rohingya refugees fleeing violent persecution in Myanmar.

Angelina Jolie, 43, arrived at a Rohingya refugee camp in Bangladesh on Feb. 4, per the Daily Mail. Angelina, a special envoy of the UN refugee agency UNHCR, went straight to a camp in Teknaf near the Myanmar border right after she landed. While at the camp, she spoke with some of the 730,000 Muslim Rohingya refugees who have fled persecution in the neighboring country. Though she flashed a smile to photographers when she landed and was spotted sharing a pleasant moment with some of the women at the camp, what she witness gave her no reason to smile.

“I met a woman yesterday, a survivor of rape in Myanmar, and she told me ‘you would have to shoot me where I stand before I would go back to Myanmar’,” Angelina said. “I urge the Myanmar authorities to show the genuine commitment needed to end the cycle of violence, displacement, and improve conditions for all communities in Rakhine state, including the Rohingya.” Her visit comes as the United Nations said it was prepping a new appeal for $920 million to support the refugees, who fled Myanmar’s Rakhine state following a military crackdown in response to militant attacks in Aug. 2017. 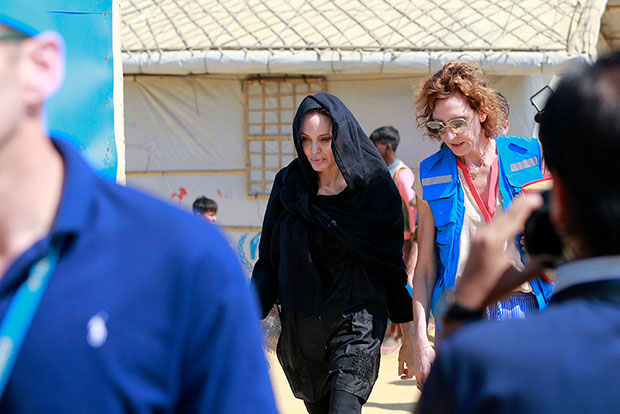 The U.N. has accused Myanmar’s army of “carrying out mass killings and rapes with ‘genocidal intent,’ ” according to the AP. The offensive has laid waste to hundreds of Rohingya villages in the western Rakhine state and displaced hundreds of thousands of people. At least 6,700 Rohingya, including at least 730 children under the age of five, were killed in the months following the violence, according to Medecins Sans Frontieres, (per the BBC.) Myanmar has denied the accusations and said they were carrying out a legitimate response to an insurgent attack. The government also disputed the body count, saying only 400 people have died and the refugees are welcomed back. The Rohingya are denied citizenship in Myanmar (a predominantly Buddhist country) and they were excluded from the country’s 2014 census, per the BBC, as the country refuses to recognize them as a people.

Angelina’s break from mom duty will continue as she will meet Bangladesh Prime Minister Sheikh Hasina and Foreign Minister AK Abdul Momen in the capital, Dhaka, on Wednesday.