Like many others, Demi Lovato was shocked to learn that 21 Savage is from the U.K., but when she commented on it, haters fired back with insults about her addiction and 2018 overdose. See her response here.

Demi Lovato deleted her Twitter on Feb. 3, after hateful comments began flooding her mentions. The controversy began when Demi tweeted a meme about 21 Savage that read, “This is how 21 Savage be writing verses,” and featured a photo of someone using a quill pen. The meme was created after 21 Savage was arrested by immigration officials, and ICE revealed that he was actually a U.K. national living in the United States illegally since 2006. After his arrest, 21 Savage was detained as officials worked out removal proceedings.

Unfortunately, Demi faced immediate backlash for posting the meme, and haters really hit below the belt. Hundreds of comments began flooding in with critics calling Demi out for overdosing on heroin last summer, and many of them were super hateful. Once Demi deleted her Twitter, similar comments began pouring in on her Instagram page. “Go shoot some more heroin Demi,” one person wrote, while another added, “She’s a hypocrite let’s pull out the heroin memes and see if this b**** doesn’t get emotional.”

Although Demi seemingly intended to take a social media break to diffuse the situation, she couldn’t bite her tongue for long, and took to her Instagram Story to share her side of the situation. “Wasn’t laughing at anyone getting deported,” she explained. “I know that’s not a joke…not have I EVER laughed at that. The meme I posted/was talking about was him writing with a feather pen. Sorry if I offended anyone. But it’s no excuse to laugh at someone’s addiction, let alone their OD.” 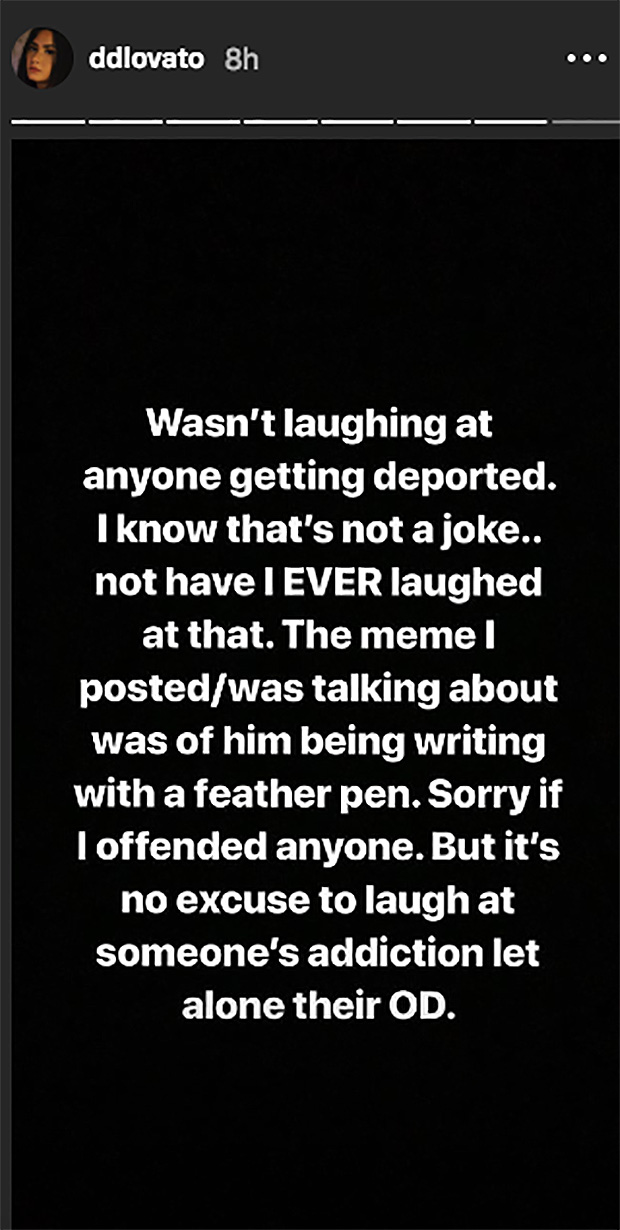 She later added, “Lastly, I wasn’t making fun of anything having to do with deportation or even anything against him. I was laughing at who the f*** knew 21 was British? Literally no one. That’s it. It doesn’t go deeper than that. I’m sorry if I upset people truly.”

Demi nearly died after overdosing at her home in July, and she went on to complete three months in rehab. She recently celebrated six months of sobriety, but it’s no secret that her drug addiction will always be a constant battle in her life. Meanwhile, 21 Savage’s lawyer released a statement explaining that the rapper is working with officials to “clear up any misunderstanding” about the arrest. It is unclear when his case will proceed to an immigration judge at this time.