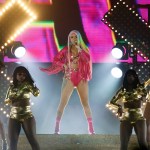 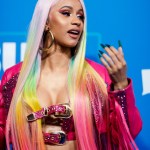 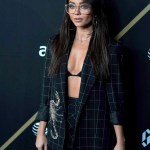 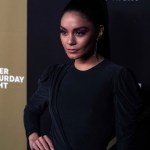 Sarah Hyland looked fantastic when she stepped out in a black bra under a matching open blazer top and skirt at DirecTV’s Super Saturday Night 2019 party in Atlanta on Feb. 2.

Sarah Hyland, 28, flaunted her fantastic figure when she stepped out in a flattering outfit at DirecTV’s Super Saturday Night 2019 party in Atlanta, GA on Feb. 2. The Modern Family star showed off some cleavage in a black bra that she wore under an open black and white checkered blazer with a matching skirt at the event. She also sported her famous clear glasses and big hoop earrings to top off the incredible look.

Sarah was just one of many gorgeous celebs who celebrated the upcoming Super Bowl 53 game at the party. In addition to her boyfriend Wells Adams, 34, Sarah was joined by actor Zachary Levi, 38, who posed for pictures with her at the party. Other stars in attendance included Vanessa Hudgens, 30, and Emily Ratajkowski, 27.

Sarah’s appearance at the pre-Super Bowl bash is a great one to see. The actress has been open about her health struggles over the past year, and her courage and perseverance has been very inspirational to her admirers. The brunette beauty suffers from kidney dysplasia, which is a medical condition in which kidneys don’t normally develop, and last Mar., she showed off a pic of her surgical wound after undergoing a second kidney transplant in 2017. In the close-up photo, Sarah’s bloody wound, which was bandaged up, can be seen just above her underwear as she held her shirt up. There also appeared to be some bruising in the raw snapshot. Sharing such a gutsy photo proved Sarah’s not afraid to show off the not-so-pretty parts of life.

In addition to the unfiltered wound photo, Sarah has also shared pics of herself in a hospital bed and of her scars over the past year. Despite her difficult health issues, the strong celeb has been determined to fight back and live life to the fullest, and it’s one of the reasons she’s one of the most impressive young stars in the entertainment industry today!