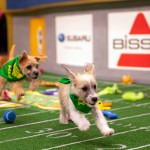 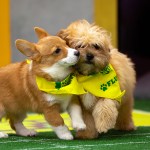 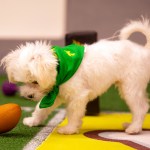 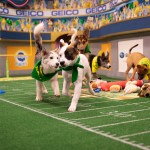 Forget the Super Bowl. The Puppy Bowl is where it’s at on February 3! Get to know the furry friends from Team Ruff and Team Fluff before they compete for the Lombarky Trophy!

Ready for an instant dose of happiness? Just hours before Super Bowl LII, another awesome, and dare we say, equally important, game is happening. It’s the Puppy Bowl! Unfamiliar? You poor thing. The Puppy Bowl is a magical event in which two teams consisting entirely of fluffy puppies are pitted against each other to play football in a tiny stadium. Saying these tiny floofs are playing football is actually a little bombastic. It’s more like chaos. The pups actually playing with piles of toys as a referee with the world’s best job attempts to coax them toward their goal posts. Is there honestly anything better?

This yearly event is more than a cute Super Bowl precursor. When the Puppy Bowl first started, the goal was to get these shelter dogs adopted, and they always do! In 2019, the focus is on the adoptable pups who were displaced by natural disasters in Puerto Rico, Florida, and Texas. The Puppy Bowl players came from 51 different animal shelters this year, including Puerto Rico’s The Sato Project. The bowl’s referee of eight years, Dan Schachner, told CNN that he hoped he was helping raise awareness about “the joys of fostering and adopting animals” each years. “Dogs … make us more human and they make us better people,” he said.

For cute as all hell pics of the Puppy Bowl contestants scroll through our gallery above. We dare you not to be absolutely delighted by these fuzzy little faces!