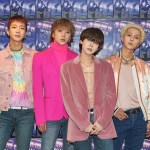 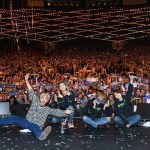 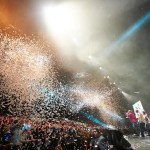 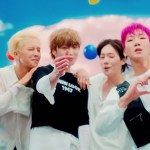 K-Pop superstars Winner hit the stage in the big apple on Jan. 29, and they slayed Madison Square garden while fans filled the air with deafening screams. In all white ensembles, topped with flashy metallic jackets, the foursome delivered a dazzling stage show filled with their biggest hits! The only time they stopped dancing, was to share sweet messages for fans in the crowd. The show marked the last leg of their first full trek across North America,and  proved to be a special one for the Korea-based band. We caught up with the guys backstage before the concert, to hear all about their trip to America, and a hilarious fan memory that you HAVE to hear!

So first off, I’d love to know how fans in America defer from those back home.

The band culture itself is very different because in Korea, the fans sing along to the fan chants. But in America, when they perform onstage, they think that the fans…they get to really enjoy themselves. They see them dancing. And so, they that is the main difference between the two.
Do you have a standout memorable moment with a fan, either from recently or through the years?
Yeah, this one time, it was on the Japan tour. What happened was, there was a male audience [member] and female audience [member.] They were friends and they came to see the show, and then one of the members made them go out together. They ended up being a couple! One of the members actually went down to the audience and they thought, “Oh, maybe they might be good as a couple.” And so yeah, that’s how that happened.
When you’re on tour, what is one thing you have to keep with you at all times?
Camera!
For social media snaps?
A film camera actually.
Oh, awesome! And then, during your North American tour, I was wondering if you guys had time to travel? Can you tell us about the memorable places you visited and experiences you had?
Yesterday, we went some clothing stores. Mino and I went there and it was really cool…really exciting. It was a vintage shop.
I love vintage!
Yes, and we bought a lot of clothes. Then we went to Times Square yesterday.
And looking to the future, what are some other cities and places you would like to tour and visit?
Europe…or South America. And then, North America again. We want to come back!